Update Required To play the media you will need to either update your browser to a recent version or update your Flash plugin.
By Anna Matteo
28 March, 2015

Have you ever felt pure fear, a fear that makes you act in a way you normally would not?

That is panic. Panic is a great fear that makes otherwise normal people do abnormal things.

To hit the panic button means to panic suddenly. Another common expression is widespread panic. It describes an event that causes panic among large numbers of people. For example, "The spread of disease caused widespread panic throughout Europe during The Middle Ages."

The origin of the word panic comes from the Greek word "panikos." According to Greek myth, Pan was the god of flocks and shepherds. Greek legend says that Pan was half human and half goat. He lived in the woods and in the fields. His angry voice was so scary that it caused panic to anyone who was unlucky enough to be nearby. 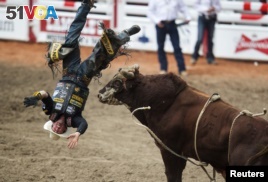 Actually ... this seems like a good time to panic. A bull rider from the U.S. gets thrown off the bull during the 101st Calgary Stampede rodeo in Calgary, Alberta, July 2013. (REUTERS/Todd Korol)

According to one Greek myth, Pan fell in love with a beautiful nymph. A nymph is a spirit that takes the shape of young woman and lives in the mountains, forests, meadows and water. Pan tried to capture her, but she ran away. The nymph hid in a river taking the form of a reed, a thick, hollow grass that lives in the water.

The wind made a song as it blew across the hollow reeds.

Pan did not know which reed was the nymph. So, he took a handful and joined them together side-by-side and carried it with him to hear the music it played.

Today, we call this instrument a pan flute.

Of course, this is just the Greek story. Pan flutes also have a long history in Europe, Asia, Africa and the Americas.

Just like the pan flute, panic can be found everywhere.

Mental health experts treat people with panic disorders. The American Psychological Association defines a panic attack as "a sudden surge of overwhelming, or extreme, fear that comes without warning and without any obvious reason."

The most infamous financial panic in the U.S. was the stock market crash of 1929. Some people on Wall Street where stocks were traded were so panicked that they jumped from their office windows. 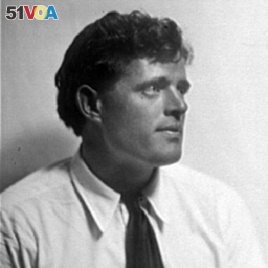 Jack London was an American writer who wrote "The Sea Wolf." He left school at age 14 to become a seaman. Published in 1904, "The Sea Wolf" has a panicked ship-wreck scene that is partly based on Mr. London's experience as a sailor in the Pacific Ocean.

Two ships crash together in the ocean. Women passengers scream with panic as the ship goes down into the freezing ocean waves. As one man finds himself adrift alone in the sea, another type of panic takes hold of him.

"I was alone. I could hear no calls or cries--only the sound of the waves, made weirdly hollow and reverberant by the fog. A panic in a crowd, which partakes of a sort of community of interest, is not so terrible as a panic when one is by oneself; and such a panic I now suffered. ... I confess that a madness seized me, that I shrieked aloud as the women had shrieked, and beat the water with my numb hands."

Panic is a powerful tool in myth or literature but not so much in real life. So, next time you feel extreme fear taking hold of you, causing you to lose all reason, remember to remain calm. And don't panic.

Anna Matteo wrote this for VOA Learning English. Mario Ritter was the editor.