Update Required To play the media you will need to either update your browser to a recent version or update your Flash plugin.
By VOA
22 March, 2016

Google has chosen the national winner of its "Doodle 4 Google" contest.

"Doodle" means "draw." School-aged children across the United States sent their drawings to Google in the contest in 2015. For the contest, students created "doodles" centered around the theme "What makes me...me."

Fifteen-year-old Akilah Johnson was this year's winner. Johnson is a student at Eastern Senior High School in Washington, D.C. She titled her doodle "My Afrocentric Life."

She said in a Google blog post, "I based this picture off my lifestyle and what has made me into what I am today."

The word "Google" in Johnson's doodle is drawn like a hair braid. She painted the word "power" in black, and drew the image of a woman's fist that comes from one of her favorite artists. 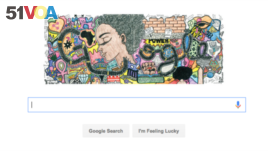 Her drawing trended on social media.

Johnson's drawing was the main image on the U.S. Google homepage on Monday and Tuesday. She will receive a $30,000 college scholarship. And her high school will also receive a $50,000 award from Google.

In 2015, Google received more than 100,000 entries from students across the United States.

braid - n. an arrangement of hair made by weaving three sections together

fist - n. the hand with its fingers bent down into the palm