Dozens of people are missing and feared dead after a landslide in northern Myanmar.

The accident took place Friday in Hpakant, Kachin state. It is the center of Myanmar's jade mining industry. At least 100 people died in a similar disaster there last month.

Rescue workers are searching for bodies. Officials have not said how many people died or were injured. 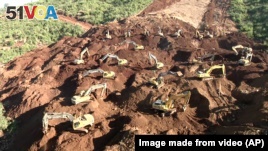 Excavators search for bodies as workers and rescue personnel gather in Hpakant, Kachin State, Myanmar, Tuesday, Nov. 24, 2015. Soldiers, police and volunteers pulled body after body from the rubble in northern Myanmar on Tuesday as the death toll continued to rise from a landslide near several jade mines. (AP Photo)

Hpakant is about 950 kilometers northeast of Yangon, Myanmar's biggest city. It is home to some of the world's highest-quality jade.

Global Witness is a nonprofit organization that exposes the misuse of revenue from natural resources. It said Myanmar's jade production was worth about $31 billion in 2014. But it says the local population sees little benefit.

Most of the mining is done by large industrial firms. Locals can only hunt through the rubble searching for pieces of jade that were overlooked.

landslide – n. a large mass of rocks and earth that suddenly and quickly moves down the side of a mountain or hill

misuse – n. to use (something) incorrectly

rubble – n. broken pieces of stone, brick, etc., from walls or buildings that have fallen

overlook – v. to fail to see or notice (something)