22 Killed at Hotel in Mali

Update Required To play the media you will need to either update your browser to a recent version or update your Flash plugin.
By VOA
20 November, 2015


At least 22 people have been killed in an attack on a luxury hotel in the capital of Mali.

Suspected Islamic gunmen held 170 people hostage at the Radisson Blu hotel in Bamako on Friday. Malian officials reported that all hostages were rescued at the hotel within a few hours of the attack.

The New York Times newspaper and the Reuters news agency report that 27 people were killed in the attack. Malian officials say at least three of the gunmen have been killed.

The attackers shouted "God is great" before they opened fire.

The hotel is popular with international visitors, including United Nations workers. It is close to the airport. 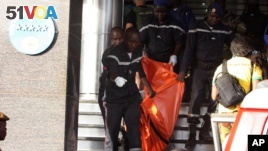 A body is removed from the Radisson Blu hotel, after it was stormed by gunmen during a attack on the hotel in Bamako, Mali, Friday, Nov. 20, 2015. Islamic extremists armed with guns and grenades stormed the luxury Radisson Blu hotel in Mali's capital Friday morning, and security forces worked to free guests floor by floor. (AP/Harouna Traore)

Malian and U.S. Special Forces reportedly moved through the hotel to rescue the remaining hostages.

A VOA reporter on the scene said U.N. and Malian forces surrounded the hotel and blocked all roads to the building. She said she heard explosions and gunfire during the afternoon.

Earlier, people in the capital were urged to stay at home or work until the attack ended.

Officials say gunmen drove to the entrance of the hotel early in the morning in a car with diplomatic license plates.

The Reuters news agency says the gunmen earlier released hostages who were able to say parts of the Muslim holy book -- the Quran. The New York Times newspaper reports "the hostage takers had been releasing Muslims and continuing to hold non-Muslims."

Citizens of the United States, France, Nigeria and China were reportedly among those who had been held hostage.

Although not confirmed, an al-Qaida terrorist group has claimed responsibility for the attack. Mali has been fighting militants and radical Islamists for several years.

The attack in Mali shows the continuing threat to the country from militants in northern and central Mali.

In 2013, a French-led military force ousted Islamist groups from power in northern Mali. The groups had seized power in the north after the military ousted the civilian government in Bamako in 2012.

An attack in the capital in March on a restaurant popular with travelers killed five people.

Please let us know what you think of the terrorism in Bamako. Write a comment below this story or on our Facebook page.

license plate – n. a metal plate on a vehicle that shows numbers and letters used to identify the vehicle