Update Required To play the media you will need to either update your browser to a recent version or update your Flash plugin.
By Dan Friedell
04 January, 2017

On one recent morning in the American state of Utah, 2-year-old twin boys Bowdy and Brock were playing in their bedroom.

The boys were climbing on a piece of furniture called a dresser. They were trying to get into some empty drawers and climb to the top of the dresser.

But as they both tried to climb up, the large dresser fell down on top of them. 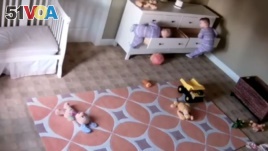 Brock and Bowdy Shoff play on a dresser before it tipped over. One of the boys became stuck underneath, and the other helped rescue him.

The accident was recorded on a camera the boys' parents put in the bedroom. Some parents use these kinds of cameras to watch their children playing in another room.

One of the young boys, Bowdy, managed to escape from under the dresser. But his brother, Brock, remained stuck under it.

The video shows Bowdy walking around the dresser trying to find a way to free his brother. Almost two minutes pass. But Bowdy cannot move the dresser.

Eventually, though, Bowdy found a way to push the dresser toward the wall. His brother was then able to roll out from underneath the big piece of furniture.

Both boys are okay. They were not hurt.

Their parents decided to put a video of the incident on YouTube. They hoped it would be a warning to other parents around the world.

In just three days, the video has been viewed over 7 million times. It is the top trending video on YouTube.

Ricky Shoff is the father of the boys.

He posted the video to his Facebook page on January 1. He wrote: "I've been a little hesitant to post this. But I feel it's not only to bring awareness, but it is also incredible."

Shoff also told his friends to share the video and to make sure their furniture was secure. For example, big pieces of furniture should be safely attached to a wall or to the floor.

Kayli Shoff, the boys' mother, said when she first saw the video, she "felt like the worst mom."

But the parents said they made the video public even though they knew they would be criticized for not paying enough attention to their children.

This is not the first time falling furniture has made the news in recent months.

In December, furniture-maker Ikea agreed to pay $50 million to the families of three American boys, in three different states, killed by falling dressers.

The company is recalling its furniture. It is also offering customers a refund or free tools to attach the furniture to a wall.

What do you think of the video from Utah? We want to know. Write to us in the Comments Section or on 51VOA.COM.

furniture – n. chairs, tables, beds, etc., that are used to make a room ready for use

drawer – n. a box that slides into and out of a piece of furniture (such as a desk) and that is used to store things

stuck – adj. difficult or impossible to move from a position

hesitant – adj. slow to act or speak especially because you are nervous or unsure about what to do