Update Required To play the media you will need to either update your browser to a recent version or update your Flash plugin.
By Dan Friedell
13 June, 2016

A woman in the U.S. state of Louisiana had an unusual visitor recently.

A security camera recorded a young boy riding his bicycle up to the home of Hollie Mallet. The boy stopped in the driveway next to her house. Then he followed the driveway into the garage, where he gave her dog a quick hug.

In late May, Mallet posted a video from the security camera on her Facebook page with this message: "Attention neighbors! Anyone know who this sweet little boy is?"

Mallet explained that she had seen the boy a number of times running into her garage to play ball with her dog Dutchess or to give Dutchess a hug.

Mallet said, "I'd like to tell him he's welcome to stay and play, she loves the attention!"

Within two hours of her Facebook post, the neighbors helped identify her mysterious visitor. The boy turned out to be 9-year-old Josh Breaux. He lives nearby and loves dogs.

Hollie Mallet's mystery made news around the world. Her original Facebook video has been viewed almost four million times.

Mallet contacted Josh Breaux's mother Ginger to set up a play date between the boy and Dutchess the dog. 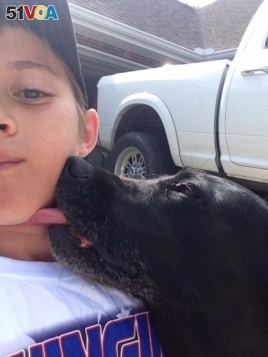 When Josh's mother learned that her son had been sneaking into someone's house to play with a dog, she was not exactly happy. But she was glad her son had found a new friend.

Ginger Breaux wrote about her son's experience on Facebook just the other day. She wrote: "When we are ready and decide it's time [to get a new dog], we will definitely keep everyone updated! I am still beyond amazed at the positive response the video and story has gotten from all over the world."

What would you have done if you found out your child was the "drive-by" hugger? We want to know. Write to us in the Comments Section or on 51VOA.COM.

garage – n. a building or part of a building in which a car, truck, etc., is kept

hug – n. the act of putting your around someone especially as a way of showing love or friendship

sneak – v. to move quietly and secretly in order to avoid being noticed