Update Required To play the media you will need to either update your browser to a recent version or update your Flash plugin.
By Dan Friedell
01 October 2021


American drug-maker Merck said Friday that its experimental pill reduced hospitalizations and deaths by half among people infected with COVID-19 in a drug trial.

The drug-maker said it will soon ask health officials in the United States and around the world to approve the pill for the treatment of coronavirus.

If cleared, the drug, called molnupiravir, would be the first pill approved for the treatment of COVID-19. All other approved treatments must be injected or given through IV by healthcare workers. A pill can be taken at home and is easier to send around the world. 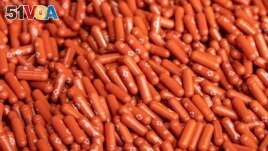 Merck & Co. announced Friday, Oct. 1, 2021, that its experimental COVID-19 pill reduced hospitalizations and deaths by half in people recently infected with the coronavirus. (Merck & Co. via AP)

Dr. William Schaffner is an infectious disease expert at Vanderbilt University who was not involved in the research. He said such a pill would provide treatment to "many more people, much more quickly and, we trust, much less expensively." And Dr. Anthony Fauci has also said a pill that can be taken at home as soon as people feel sick will help control the virus.

Merck and its partner Ridgeback Biotherapeutics studied 775 people with mild to moderate symptoms of COVID-19 in the U.S., Europe, Latin America and Africa. The patients also had existing health problems that increased their risk for severe disease.

Patients in the Merck study were not vaccinated for COVID-19. Merck said there were some side effects among both groups but did not describe them. The drug-maker said its pill works by preventing the virus from easily reproducing itself. But earlier studies showed the drug did not help people who were already very sick.

A group of independent experts following the trial advised Merck to stop it early because the pill seemed to be working so well. Merck said it will soon send the trial results to the U.S. Food and Drug Administration (FDA) for review.

Dr. Dean Li is the vice president of Merck Research Laboratories. He said: "It exceeded what I thought the drug might be able to do in this clinical trial." Li noted that a 50 percent reduction in hospitalization or death is "a substantial clinical impact."

Pfizer and Roche, two other drug companies, are working on similar products and may have results from their drug trials soon.

Dan Friedell adapted this story for Learning English based on a report by The Associated Press. Susan Shand and Hai Do were the editors.

How do you feel about the new drug? Tell us in the Comments Section and visit 51VOA.COM.

IV– n. a small, rounded object that you swallow and that contains medicine, vitamins, etc.

mild – adj. not harsh or severe

placebo– n. a pill or substance that is given to a patient like a drug but that has no physical effect on the patient

exceed – v. to be better than (something)

clinical – adj. relating to or based on work done with real patients : of or relating to the medical treatment that is given to patients in hospitals, clinics, etc.