Update Required To play the media you will need to either update your browser to a recent version or update your Flash plugin.
By Faith Pirlo
12 July 2022


A drug company has asked the United States Food and Drug Administration (FDA) for permission to sell a birth control medicine "over the counter." That means it can be bought without providing a doctor's order, or prescription.

HRA's hormone-based drug comes in pill form and prevents pregnancy. Such contraceptive medicine was introduced in the 1960's and has become the most common form of birth control for women in the U.S. But, it has always required a prescription for purchase. The pill can lead to blood clots in some users, although this is rare. 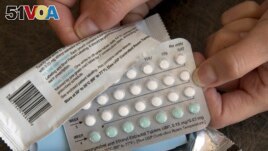 HRA's request to the FDA argues that users can measure the risks on their own and use the pill successfully.

"For a product that has been available for the last 50 years, that has been used safely by millions of women, we thought it was time to make it more available," said Frederique Welgryn, HRA's chief strategy officer.

The HRA medicine is called Opill and is not sold in the U.S. The FDA could approve it for sale by next year. Many women's health and reproductive rights supporters want other prescription contraceptives and abortion pills to make the move to over-the-counter.

The FDA action could guide many other decisions about women's health care in the years to come. Reproductive freedom is a major issue in the country. Last month, the U.S. Supreme Court overturned Roe v. Wade, the 1973 decision that established the constitutional right to seek medical abortions.

In 2006, the FDA approved the emergency contraceptive pill, called Plan B. The medicine, progestin, prevents ovulation from taking place. It does not end an established pregnancy. Last year, the agency removed other limits on mifepristone, permitting patients to get the medication by mail after meeting with a doctor virtually. The medicine, mifepristone, blocks the body from producing a substance needed to maintain pregnancy.

Abortion opponents disagreed with those decisions.

Democratic Party lawmakers were urging the FDA to consider over-the-counter contraceptive requests even before HRA's announcement on Monday.

In a letter from March, 50 members of the House of Representatives' Pro-Choice Caucus called on the FDA to consider over the counter birth control pills "without delay and based solely on the data."

Many of America's common over-the-counter medications were once prescription-only drugs, including some pain and allergy medicine. For each medication that made the change, drug companies had to show that users understand the labeling on the bottle, can judge the risks, and can not only use it safely, but effectively without medical care from a doctor.

Over-the-counter birth control pills are available around the world, including countries in South America, Asia, Africa, and Europe.

HRA's drug was of special interest to women's health advocates because they say the pill has fewer safety issues than other similar medicine. This is because the majority of other birth control pills contain a combination of the body substances progestin and estrogen. The estrogen can make women's monthly periods lighter, shorter and consistent in timing.

But estrogen can also increase the risk of blood clots, especially in women who may have heart problems, who smoke and are over the age of 35. The progestin-only pill is advised for use in people who may be at higher risk for blood clots.

HRA received financing for its research through The Oral Contraceptive Over-the-Counter Working Group. This 20-year-old group includes women's health researchers and advocates. They want to make contraceptives easy to get.

Kelly Blanchard is the president of Ibis Reproductive Health, a group member that supports increased availability of abortion and contraception. She said, "A lot of our research has been about making the case to help inspire and support a company to take this work on."

Many medical groups, including the American College of Obstetricians and Gynecologists and the American Medical Association support over-the-counter contraception.

But some groups like the nonprofit National Center for Health Research disagrees. They say that the safety risks of possible deadly blot clots are not worth the benefits.

The FDA continues to examine the safety of birth control pills. Last year, the FDA placed a hold on a study of over-the-counter contraception by Cadence Health, another drugmaker. It said Cadence needed to expand blood pressure checks on study subjects.

Before the FDA approves HRA's application, it requires a public meeting to consider the safety concerns and the overall request.

A decision is likely to come in the beginning of 2023, HRA leaders said.

Supporters like Blanchard hope that pill will be the first of many to be approved. "Once we see the approval of this product, it will demonstrate that it's possible and that the data is strong. Hopefully, we'll see the process speed up from here," Blanchard said.

Matthew Perrone wrote this article for The Associated Press. Faith Pirlo adapted it for Learning English.

blood clot –n. a mass of dried blood that stops the flow of blood in the body and that can cause serious health problems

abortion — n. a medical procedure used to end a pregnancy and cause the death of the fetus

ovulation — n. the time during a women's cycle when the body releases an egg for fertilization

virtually – adv. to describe something that can be done or seen using computers or the internet instead of happening in a physical placeMaintain

allergies – n. the body's reaction to something that it is sensitive to

inspire – v. to move (someone) to act, create, or feel emotions