Update Required To play the media you will need to either update your browser to a recent version or update your Flash plugin.
By Jonathan Evans
25 July 2022

The report came from the U.S. Centers for Disease Control and Prevention (CDC). It said there was an increase in hospital infections and deaths in 2020.

Dr. Arjun Srinivasan, a CDC expert, called it "a startling reversal" that he hopes was a one-year happening. 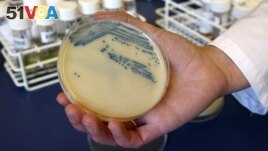 FILE This Oct. 12, 2009 photo shows a petri dish with MSRA cultures at the Queen Elizabeth Hospital in King's Lynn, England.

CDC officials think there were several reasons for the rise. One was how COVID-19 was treated when it first appeared in the United States in early 2020.

Antimicrobial drug resistance happens when organisms like bacteria and fungi gain the ability to resist the drugs that were designed to kill them. The misuse of antibiotics was a big reason for the increase, officials said. Unfinished or unnecessary prescriptions that did not kill the microorganisms made them stronger.

Before the pandemic, health officials said U.S. drug-resistant infections appeared to be going down. Deaths fell from an estimated 44,000 in 2012 to 36,000 in 2017 — an 18 percent decrease. The government credited hospitals for the careful use of antibiotics, and for separating patients who might spread infections.

The CDC does not have 2020 data for all infectious diseases. But it does have information on seven kinds of bacterial and fungal infections that were found in hospital patients. They include MRSA and a bacterium called CRE, which is known as "the nightmare bacteria."

The CDC reported increases of 15 percent or more in infections and deaths from that group of microorganisms.

From March to October 2020, almost 80 percent of patients hospitalized with COVID-19 received an antibiotic, CDC officials said. Use of certain kinds of antibiotics increased as doctors used many kinds of drugs to fight both the coronavirus and any bacterial co-infections.

By 2021, use of antibiotics dropped. Dr. Srinivasan noted that the use of catheters, ventilators and other medical devices might also be down. Those devices are used on very sick patients and can be a means for drug-resistant microbes to enter patients' bodies.

Any increase in COVID-19 hospitalizations — like the one being seen in the U.S. currently — increases that risk, he said.

reversal –n. a change to an opposite state or situation

prescription –n. a written message from a doctor that officially tells someone to use a medicine

catheter –n. (medical) a tub that directly injects medicine or fluid into the body

ventilator –n. (medical) a device for helping a person to breathe