Update Required To play the media you will need to either update your browser to a recent version or update your Flash plugin.
By Anna Matteo
12 July 2021

In the United States, deaths related to the use of the pain-killing drugs opioids have long been described as a problem for poor white people in small towns and rural communities. In the past several years, however, opioid deaths have increased greatly across the country. And the COVID-19 pandemic has worsened opioid deaths in some of the most at-risk communities of Black Americans.

The Associated Press reports that, in the city of St. Louis, Missouri, deaths among Black people increased at three times the rate of white people last year during the pandemic. Black men in Missouri are now four times more likely than a white person to die of an overdose.

One of them was Craig Elazer.

Elazer struggled all his life with anxiety, a feeling of fear and nervousness. He was never treated for it. So, at a very young age, he started taking drugs and depended on them to calm himself. The addiction, or drug dependency, led him to homelessness and time in prison. 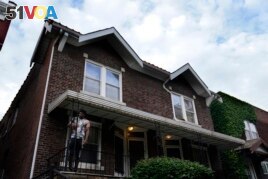 Last September, his sister, Michelle Branch, found her 56-year-old brother dead in a poor neighborhood in north St. Louis. She looked down at his body, saying, "Society failed him. And I had a sense that he'd finally been set free."

Branch said that her brother was a bright student but struggled to pay attention. Had his condition been treated, Branch said she believes he would be alive today. She added that back then they did not catch many types of mental illness, "...especially not in little Black kids."

Dr. Kanika Turner is a St. Louis doctor who leads an effort to stop the crisis. She describes the increase in opioid deaths as a civil rights issue as urgent and important as any other.

She said the hardest-hit communities are the same ones being destroyed by unfair drug sentencing. Black men are more likely to be sent to prison instead of treatment, Turner said.

Last year, the death of George Floyd under a police officer's knee in Minneapolis, Minnesota led to protests around the world. Those who defended the officer claimed that the drug fentanyl, found in his body, had caused his death. But the officer was found guilty of Floyd's murder in a trial last April.

Fentanyl is a man-made opioid with 50 to 100 times the strength of a controlled substance like morphine. The U.S. National Institute on Drug Abuse says that man-made opioids, including fentanyl, are now the most common drugs involved in drug overdose deaths in the United States.

The drug flooded the streets of St. Louis last year. Rachel Winograd, a professor at the University of Missouri-St. Louis, followed the state's overdose information. She said in the first six months of 2020, deaths increased 64 percent among Black people from the same period the year before. Deaths increased 40 percent among white people.

Other northeastern states in the U.S. experienced similar increases. Doctors in Philadelphia, Pennsylvania found that in the first few months of the pandemic, overdoses increased more than 50 percent for Black people while decreasing for white people. In Massachusetts, health officials announced that overdose deaths among Black men increased in 2020 by nearly 70 percent.

Researchers at the University of California, Los Angeles, also found an overall increase of 42 percent in overdose deaths across the U.S. in 2020. The largest increase was for Black people, with a sharp increase of more than 50 percent.

Narcan is a medicine that can bring people back from a drug overdose before it is too late.

In a crisis, many in St. Louis are slow to call 911, the emergency help number. This is because they fear the police. So, now activists, like Jerome Anderson, pass out the medication. He is trying to get as much Narcan on the streets as possible.

He calls out to people walking by: "Hey, take some Narcan. Save a life. I'm tired of going to family funerals."

Anderson himself was a drug addict and has been in recovery for 26 years. In the last six months, he has sung at three family members' funerals. They all died from an overdose.

He carries around a letter saying that he is not a police officer. Sometimes drug dealers let him stand next to them, to hand their customers his Narcan medicine.

Jamilia Allen was once a top student and the captain of her high school cheerleading team. Back then she judged people who used drugs. But now she is fighting her own drug addiction.

Allen has also used Narcan to save her friends, more than once. She said, "I'm not going to let this kill me, and if I can help anyone else, then that's one less person like me."

On the night Craig Elazer died last September, the emergency workers stood over his body and pointed to a white substance on his bed. "Fentanyl," they said.

Claire Galofaro reported this story for the Associated Press. Anna Matteo adapted the story for Learning English. Hai Do was the editor.

overdose – n. an amount of a drug or medicine that is too much and usually dangerous

pill – n. a usually medicinal or dietary preparation in a small rounded mass to be swallowed whole

cheerleading – n. a person who is a member of a group (typically a group of young women) who shout out special songs or chants to encourage the team and entertain the crowd during a game in sports like American football and basketball