Update Required To play the media you will need to either update your browser to a recent version or update your Flash plugin.
By Bryan Lynn
07 July, 2017


Dubai is the commercial capital of the oil-rich United Arab Emirates in the Persian Gulf. But officials want to turn it into the world's "smartest" city.

Earlier this year, Dubai announced plans to be the world's first city to use self-flying taxis. In June, it placed the first robot police officer at shopping centers and places popular with visitors.

Dubai police officials now say they plan to deploy self-driving vehicles to patrol city streets by the end of the year. 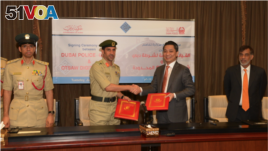 Dubai will be the first in the world to deploy the O-R3 vehicle, according to the Singapore company that builds it. The company, OTSAW Digital, recently signed an agreement with the Dubai Police force to supply the driverless robots.

The vehicles look a lot like most other automobiles, but are much smaller. They are equipped with cameras, machine learning tools and 3D technology to help them operate independently. The robots automatically charge themselves when power gets low.

The vehicle's cameras can scan faces and record registration information to check for criminals and possible illegal activity. A police official said the robot can recognize people in any area. It will be used to "identify suspicious objects" and follow suspects.

"We seek to augment operations with the help of technology such as robots," said Dubai's police chief. "We always search for the best technology to serve our police work for a safer and smarter city."

The O-R3 can communicate with computers at police centers in different locations. The patrolling robot is able to send data and video to the centers, where operators can control the vehicle remotely.

The vehicles can also work together with drones that can be launched from the back of the robot. The drones can then follow the vehicle and provide support from the air.

The CEO of OTSAW Digital, Ting Ming Ling, says the use of such vehicles is designed to help humans with their jobs, not replace them.

"Ultimately, robots exist to improve the quality of human lives - where men take on high value jobs while robots perform the low skilled ones," he said.

Bryan Lynn wrote this story for VOA Learning English, based on information from Dubai Police, Gulf News and other sources. Hai Do was the editor.

Do you think driverless vehicles can help police do their jobs? Write to us in the Comments section, and visit 51VOA.COM.

patrol – v. drive or walk through an area

scan – v. look around an area to find a person or thing

suspicious – adj. not trusting someone

augment – v. increase or add to

remotely – n. from a distance or another location

drone – n. kind of aircraft that does not carry a pilot or passengers

ultimately – adv. at the end of a process