Update Required To play the media you will need to either update your browser to a recent version or update your Flash plugin.
By Dan Friedell
01 January 2022


You may know Duolingo as an app on your mobile phone to learn languages, including English. But the company recently launched an English test that it hopes will gain more acceptance, like the long-established TOEFL and IELTS.

TOEFL is an English test from the American organization Educational Testing Service. And IELTS is owned by the British Council and others.

Duolingo was founded in 2011 by Luis von Ahn, a professor at Carnegie Mellon University in Pittsburgh, along with one of his students. The company launched its Duolingo app a year later. It now provides learning instruction for over 40 languages. 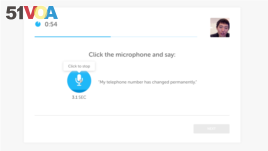 An image of the speaking part of the Duolingo English Test.

Von Ahn grew up in the Central American country of Guatemala. The company said he had to travel to neighboring El Salvador for an English test while applying to universities in the United States. With that experience, he wanted to create a test so more students could prove their English ability. And the Duolingo English Test, DET, came out in 2016.

Jennifer Dewar works for Duolingo. She helps universities around the world understand how the Duolingo test can measure students' English language skills.

"For me, when I encountered the Duolingo English Test, I saw it as a real solution and as a real tool that could democratize access to education for students around the world."

Dewar said hundreds of universities had already accepted the Duolingo test before the COVID-19 pandemic closed many testing centers. Since then, the number grew to almost 2,000 around the world. The schools included well-known universities like Georgetown, Caltech and Yale.

Florida State University in Tallahassee, Florida is one of the schools that is trying out Duolingo's test. Patrick Kennell is director of the university's Center for Intensive English Studies. He is excited about the new ideas Duolingo brought to English testing, but he is not sure whether it measures English skills as well as the traditional tests.

"Is it valid for what it says it measures?" he asked. He also wondered if students who use their score on the DET to get into a university will have trouble keeping up in the classroom. "Only time will tell," he added.

The Duolingo test requires students to fill in missing letters in groups of words, listen and choose whether the word they hear is English or made-up, write short answers to questions, and listen to a sentence and write it word-for-word. Test takers are also required to speak English into their computer microphone about several subjects. Most questions have a time limit. And the test, which costs $49, takes less than one hour to complete.

Because Duolingo's test can be taken by a student at home, some universities are concerned that it might be easy to cheat. But Duolingo says it is always working to make sure that students cannot.

The company also works on security because it does not want a student who got a good score on the DET to arrive at school and not be able to speak English as well as their score showed.

Before the online test starts, students must show their identification paper or passport, and take a photo of themselves. If the two photos do not look the same, a reviewer will question the test results.

Since Duolingo's test is adaptive, meaning the next question depends on the answer to the current question, no one has ever taken the same test as another person.

Basim Baig is Duolingo's head of security. He said no matter what testing companies do, some people probably cheat and do not get caught.

Most universities want students to score close to 120 points on the DET. The top scores will be around 150. But even people who grew up speaking English do not always score that high.

Burr Settles is one of the test creators at Duolingo. He said Duolingo aims to make its test a good simulation of how people speak English in real life.

"We want the test to be something that is ... fun and natural to take, and at the same time, you're better off learning the language than to, like, learn how to take the test."

In the year ending on July 31, 2021, Duolingo said most test-takers came from India, China and the U.S.

Kennell compared the DET to tests that one might give an athlete. He said just because a soccer player can run fast or kick the ball well, it does not mean that player will be as good as Lionel Messi. The player must understand the game, work with teammates and fit into the team's system.

In the same way, he said a college student needs to be able to read difficult books, listen to lessons, write papers and join class discussions in English.

The IELTS and TOEFL, Kennell said, measure those skills better since they simulate what students will do in a university classroom.

Regardless of the acceptance rate for the Duolingo English test, it has already made an impact. Earlier this year, ETS, the maker of TOEFL, launched a shorter, less costly test called TOEFL Essentials.

Florida State's Kennell, however, warned that no English test is perfect.

"Tests don't tell it all, definitely. We've had students come to us, they've gotten 100 on the TOEFL, they get started in their classes and they can't, they can't do it. An English test is just a piece of the whole package."

Have you taken the Duolingo English Test or studied a language using one of their programs? Tell us in the Comments section and visit 51VOA.COM.

apply – v. to ask formally for something (such as a job, admission to a school, a loan, etc.) usually in writing

encounter – v. to have or experience or meet something

microphone– n. a device into which people speak or sing in order to record their voices or to make them sound louder

simulation – n. something that is made to look, feel, or behave like something else especially so that it can be studied or used to train people

definitely – adv. without doubt : in a way that is certain or clear