Update Required To play the media you will need to either update your browser to a recent version or update your Flash plugin.
By Bryan Lynn
12 January 2022


Some Dutch citizens have found new ways to release their anger about the continuing COVID-19 pandemic – by shouting and smashing things.

Twin brothers Steven and Brian Krijger showed a reporter from Reuters how enjoyable it can be to crush cars at a vehicle wreckage center in the town of Vijfhuizen, near Amsterdam. One used a sledgehammer and the other a crowbar to destroy a Peugeot 106 car.

The exercise is part of a Dutch program called "CarSmash." It aims to give people living under new anti-virus restrictions ways to release their anger and frustrations. The feelings have built up during a pandemic that is now entering its third year. 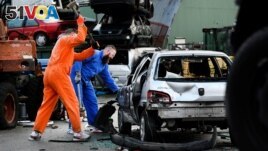 Dutch bars, restaurants and most stores have been closed since mid-December when the new measures took effect. The restrictions are set to remain in place until at least January 14. The government is seeking to contain record numbers of coronavirus cases.

"There is nothing to do these days," Brian told Reuters. "We can't work because, we own a bar and we are closed. So, we thought we'd let some of that frustration go and smash a car."

Merlijn Boshuizen runs the CarSmash program. He said people taking part are first asked to spray-paint "what's present in their lives" onto their chosen vehicle.

Then, when they start wrecking a car, they are asked to close their eyes and feel their feet on the ground. Boshuizen says the goal is for the person to "feel the power, every vein in your body, feel what you are doing, and in that way to try to get it out of your life."

Nearby, in the Hague, voice trainer Julie Scott operates "Screech at the Beach." It is a program with similar aims as CarSmash. Scott told Reuters she developed the idea while looking for "something physical and something to release some of the tension" that has been building up in people.

On a recent day, Julie joined Rozemarijn Kardijk on a windy beach near the shore. Kardijk jumped up and down shouting until she ran out of breath while trying not to laugh.

"You can just - Whaa! Let yourself go," Kardijk said. She is a business secretary hoping to learn to speak with more confidence in her professional life.

"You don't have to think about other things, it's the wideness of the beach and the sea ..." Kardijk said. "Your voice goes over the sea and it doesn't return to you. It's a sense of freedom."

sledgehammer – n. a large, heavy hammer with a long handle used for breaking rocks or other heavy material

crowbar – n. a heavy iron bar with a bent end that is used to lift heavy objects of force things open

frustration – n. the feeling of being annoyed or upset because things are not happening the way you want them to

bar – n. an establishment that sells drinks and sometimes food