Update Required To play the media you will need to either update your browser to a recent version or update your Flash plugin.
By Caty Weaver
13 October, 2015

The airplane crashed in eastern Ukraine on July 17, 2014. All 298 passengers and crew were killed.

Dutch officials announced the investigation findings Tuesday in the Dutch capital, The Hague. 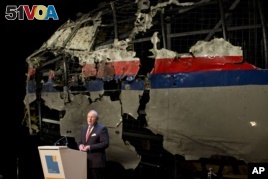 Tjibbe Joustra, head of the Dutch Safety Board presents the board's final report of the investigation into the Malaysia Airlines Flight 17 crash last year.

The Dutch Safety Board led the investigation. Its chairman, Tjibbe Joustra, spoke to family members and media. He said the plane was hit by pieces from a missile explosion. He said the missile was fired from the ground. He also said the plane broke apart while still in the air.

He said Ukraine was responsible for not closing its airspace. Russian-backed rebels and Ukrainian forces were fighting below the flight path.

"Nobody considered the possibility that civil aircraft at cruising altitude was at risk," he said.

Mr. Joustra said nations in armed conflict should put more effort into the safety of their airspace. He said flight operators should be transparent about the flight path they choose.

The majority of passengers were Dutch. But citizens of Australia, Belgium, Malaysia and Ukraine were also on board. Representatives from those countries were part of the investigation. The plane was flying from Amsterdam to Kuala Lumpur.

The investigators did not assign blame for the crash. Western nations have accused Russia-backed rebels of mistaking the plane for a military aircraft and shooting it down.

chairman - n. a person who is in charge of a company or organization

cruising altitude – n. the height in the sky at which an airplane stays for most of a flight

on board – prepositional phrase in or on a train, boat, plane etc.

assign – v. to say that someone has (something, such as blame or responsibility)