Update Required To play the media you will need to either update your browser to a recent version or update your Flash plugin.
By Jim Dresbach
11 August, 2016


Researchers say the Earth had much more oxygen nearly a billion years ago than scientific experts thought. That claim could change theories about how life developed on our planet.

The claim came from researchers at Brock University in Canada. They wanted to measure the levels of oxygen in the Earth's atmosphere nearly a billion years ago. To do this, the researchers developed a way to study small air bubbles trapped in ancient salt crystals.

"There was a lot of debate as to what the oxygen content was 800 million or more years ago," said Nigel Blamey of Brock University's Department of Earth Sciences. He said the trapped gasses showed that the oxygen level was about half of what it is today. 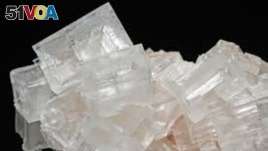 The Canadian researchers used a method to study air bubbles trapped in halite, the natural form of table salt.

The researchers say their findings have major effects for theories about how and when life developed.

Professor of Earth Sciences Uwe Brand said that higher oxygen levels in the past may turn back the clock when complex life developed. "Now paleobiologists will have reason to go looking for rocks with" evidence of these first evolutionary steps," he told the Canadian Broadcasting Corporation.

VOANews.com reported on this story. Jim Dresbach adapted the story for Learning English. George Grow was the editor.

bubble – n. a small ball of air in a solid substance

crystals – n. small pieces of a substance that has many sides and are formed when the substance turns into a solid