Update Required To play the media you will need to either update your browser to a recent version or update your Flash plugin.
By Bryan Lynn
21 November 2022


A 5.6-magnitude earthquake struck Indonesia's Java island on Monday, collapsing buildings and killing at least 162 people. Hundreds of others were reported injured.

Indonesian officials said the quake was centered near the town of Cianjur in West Java, about 75 kilometers southeast of the capital, Jakarta. 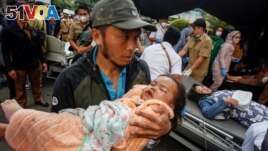 A man carries an injured child to receive treatment at a hospital, after an earthquake hit in Cianjur, West Java province, Indonesia, November 21, 2022, in this photo taken by Antara Foto. (Antara Foto/Yulius Satria Wijaya via REUTERS)

The earthquake caused numerous structures to fall around Cianjur, trapping at least 25 people under collapsed buildings. Officials said more than 2,200 homes were damaged and more than 5,300 people had become displaced.

In Jakarta, some buildings shook and some offices were evacuated.

The head of Cianjur's government, Herman Suherman, reported power outages in the area. The power cuts were affecting some communication efforts. Suherman added that a landslide had blocked evacuations in one area.

Hundreds of victims were treated on the grounds of the main government hospital in Cianjur. Elsewhere, groups of people gathered outside buildings that had collapsed.

Among numerous damaged structures were an Islamic school, a hospital and other public buildings, the disaster agency said. Officials were still working to examine the full level of damage. Indonesia's weather and geophysics agency said the quake struck at a comparably shallow depth of 10 kilometers.

Vidi Primadhania was working in Jakarta when the quake struck. "The quake felt so strong. My colleagues and I decided to get out of our office on the ninth floor using the emergency stairs," Primadhania told The Associated Press. Some workers who remained inside buildings took cover underneath their desks.

The country of more than 270 million people often experiences earthquakes, volcanic activity and ocean waves called tsunamis. This is because Indonesia sits within the so-called "Pacific Ring of Fire," a collection of volcanoes and fault lines.

In 2004, a 9.1 magnitude earthquake off Sumatra island in northern Indonesia set off a huge tsunami that struck 14 countries. The disaster killed 226,000 people along the Indian Ocean coastline, more than half of them in Indonesia.

evacuate – v. to move people from a dangerous place to a safer place

shallow – adj. having only a short distance from the top to the bottom

stairs – n. a set of steps leading from one level to another, such as in a building

desk – n. a table used for doing work on

fault line – n. a break in the Earth's surface