Update Required To play the media you will need to either update your browser to a recent version or update your Flash plugin.
By Jeri Watson
28 August, 2014


Iceland's Meteorological Office announced on Tuesday that the strongest earthquake in 10 days has struck the Bardarbunga volcano. The earthquake measured 5.7.

On Sunday, Iceland had reduced its warning about the threatening volcano from the highest possible point. It changed the warning level from red to orange. Red means an eruption – an explosion – will happen soon or is in progress.

A small volcanic explosion last week had caused fears that ash could interfere with air travel. Two earthquakes measuring 5.3 and 5.1 took place before that small explosion. People living near Bardarbunga have been removed from the area. Officials have set up a no-fly zone around the volcano. But Icelandic air space is still open.

In 2010, a cloud of ash from an erupting volcano delayed or canceled flights for days. Many travelers had to stay in Europe because overseas flights were not available. Hotels filled up fast when word of the cancellations became known. For some travelers, there was no place to stay. And some hotels, motels and other places for overnight stays raised their rates. 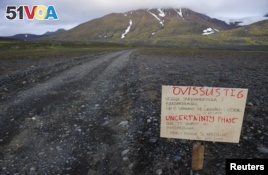 A warning sign blocks the road to Bardarbunga volcano, some 20 kilometers (12.5 miles) away, in the north-west region of the Vatnajokull glacier Aug. 19, 2014.

This story was based on a VOA News Report and written for Learning English by Jeri Watson. Our editor was George Grow. I'm Bob Doughty.

volcano, n., a mountain with a hole in the top or side that sometimes sends out rocks, ash, lava and the like, in a sudden explosion called an eruption

cancellations, n. a decision to stop doing or planning to do something: the act of canceling something such as a game or performance

available, adj., easy or possible to get to or use