Update Required To play the media you will need to either update your browser to a recent version or update your Flash plugin.
By Jill Robbins, Doug Johnson and Hai Do
02 April 2021


This weekend some Americans celebrate the Christian holiday of Easter. Others observe the Jewish holiday of Passover. And many are looking to the arrival of spring.

Easter is when Christians celebrate the life of Jesus and what they believe was his return from the dead. For most Christians, Easter this year is on Sunday, April 4. For Eastern Orthodox Christians, May 2 is Orthodox Easter Sunday.

You may wonder why the date for Easter changes every year. It is one of the "movable feasts" that change each year. In English, the word "feast" can mean a religious festival as well as a large dinner. We have both of these on Easter and Passover.

Date tied to the Moon

In the early days of Christianity, leaders decided to set the date of Easter for the first Sunday following the first full moon of the Spring season. It usually happens on or shortly after the vernal equinox, or spring equinox. The equinox is a date when day and night are the same length.

Many Christians in America attend religious services on Easter Sunday. Some of these services take place at sunrise.

Children are often told stories about the Easter Bunny. He is said to hide eggs, chocolates and other sweet treats, for children to find on Easter morning. The Easter Bunny tradition probably developed from a German celebration of spring. Germans first settled in North America in the eighteenth century.

Individual families and groups also organize Easter egg hunts for children. The best-known egg hunt in America is the event called the White House Easter Egg Roll. The president and the first family usually join children in hunting for eggs, playing games, and reading stories. However for a second year, the White House has cancelled the event because of COVID-19. 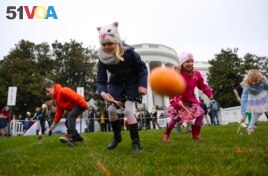 American Jews observe Passover around the same time as Easter. Passover began this year on the evening of Saturday, March 27 and ends on the evening of Sunday, April 4. Passover celebrates the Jews' escape from slavery in Egypt, called the Exodus. The Jewish holy book, the Torah, tells about how Moses led the Jews to freedom. A special dinner, the seder, begins the celebration of Passover.

Jewish families get together and eat foods that represent the Exodus story. One food is matzoh, a flat, crisp bread. It represents the hurry linked to the slaves' escape. They did not have time to let their bread rise before baking it. Another special food on the seder table is maror, bitter herbs. They represent the pain of slavery.

Easter around the world

One of our French readers tells VOA about an Easter tradition in France, where many Roman Catholics live. Churches in France do not ring their bells on the two days before Easter Sunday. The bells are silenced in honor of the death of Jesus. They ring again on Easter Sunday, the day Christians believe he came back to life.

French children are told a story about why the bells are quiet. Parents say the bells have flown to Rome to see the pope, the leader of the Roman Catholic Church. But on Sunday morning, the bells return and ring again.

The Eastern Orthodox Church celebrates Easter on May 2 this year. Orthodox Christians in America celebrate by blessing food baskets. In Greece, people color hard-boiled eggs and play a game by knocking them together. They eat lamb and party into the late night.

In Japan, spring is marked with a cherry blossom festival, known as hanami. The tradition dates back more than a thousand years. People gather under the blooming trees to eat, drink tea, celebrate and enjoy the cherry blossoms, known as sakura in Japanese. Artists and poets celebrate the short-lived blooms as a symbol of beauty.

For many countries in Central Asia and the Middle East, the beginning of spring also marks the beginning of a new year. The celebration is called Nowruz. The words "now" and "ruz" means "new day" in Farsi. The International Day of Nowruz was on March 20 this year.

During Nowruz, people visit family members and friends and exchange gifts. Iranian families set up a "haft seen" - a presentation of seven special items that represent spring and new beginnings. They include eggs, a live goldfish, a vegetable, and other foods.

Many in India and Nepal mark the arrival of spring with the Holi festival, also known as the festival of colors or festival of love. Holi was on Monday, March 29 this year.

Many Indians ignored social distancing restrictions in the big cities of New Delhi and Mumbai. They celebrated the festival by covering each other in -- you guessed it -- colors!

No matter what your culture or religion, it seems we all love spring. Spring weather is a welcome change for many people this year. Thanks to vaccines, families can once again meet and enjoy their "movable feasts."

Jill Robbins, Doug Johnson and Hai Do wrote this story for Learning English. Hai Do was the editor.

seder - n. a Jewish religious service and dinner that is held on the first or first and second evenings of the Passover

bitter – adj. having a strong and often unpleasant flavor that is the opposite of sweet

bless – v. to make (something or someone) holy by saying a special prayer

basket - n. a container usually made by weaving together long thin pieces of material

Now it's your turn. What celebrations of spring happen where you live? Write to us in the comments section.