Update Required To play the media you will need to either update your browser to a recent version or update your Flash plugin.
By VOA
22 July, 2014

The World Health Organization, the W.H.O., says the disease Ebola is spreading in West Africa. The situation frightens both local citizens and travelers.

There is no vaccine or special treatment. And the fatality rate is very high. That rate represents the number of people who get sick from Ebola and then die.

It is difficult to stop Ebola from spreading. It moves easily from person to person. The disease strikes its victims through direct contact with the blood or other fluids from the body of an infected person. For that reason Ebola patients must be kept away from other people.

The bodies of victims still contain the virus days after they die. Local traditions and burial and funeral customs also make the sickness hard to contain.

Doctors say it is important to identify an Ebola case early to prevent others from becoming infected. Patients suffer from high body temperature, bleeding and diarrhea.

Only a few prevention measures exist. The Centers for Disease Control and Prevention in the U.S., the C.D.C., and the W.H.O. suggest staying away from countries with confirmed Ebola cases. People at increased threat include those working in animal research, health care workers and others caring for patients in the community.

As of July 15, 2014, the W.H.O. says Ebola killed 68 people in Guinea, Liberia, and Sierra Leone, the three countries where the disease has been confirmed. 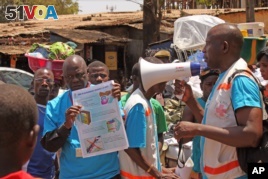 Health workers teach people about the Ebola virus and how to prevent infection, in Conakry, Guinea, Monday, March 31, 2014.

A patient in Ghana was suspected of having Ebola, but tests did not show the sickness. Ghanaian observers say the man has since died from unknown causes. The victim was an American citizen.

Doctors advise careful protective measures if you must go to an area where Ebola exists.

Wash your hands often. If soap and water are not available, use a hand sanitizer – or cleaner -- containing at least 60 percent alcohol. Avoid eating primates, bats, and bush meat or wild meat. Stay away from mines and places where bats and other rodents may live.

If Ebola has been identified directly around you, the C.D.C. and W.H.O. strongly suggest wearing protective clothing. Cover your face and hands. Goggles can protect the eyes. Try to remove Ebola germs with cleaners that fight infection.