Update Required To play the media you will need to either update your browser to a recent version or update your Flash plugin.
By Dan Friedell
20 February, 2016


The Zika virus has become a major health concern for people around the world.

They are worried that it could become a crisis like the Ebola epidemic.

The Ebola virus disease killed over 11,000 people during a two-year outbreak that started in West Africa in 2014. 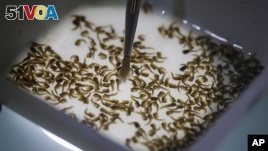 In this Feb. 1, 2016 photo, a technician from the British biotec company Oxitec, inspects the pupae of genetically modified Aedes aegypti mosquitoes, a vector for transmitting the Zika virus, in Campinas, Brazil.

Health organizations around the world say the threat from Ebola has ended.

In West African nations, people now know how the virus spreads. They know its symptoms and can get help if a relative or friend shows signs of Ebola.

Health organizations in West Africa believe they will be able to control and contain any future cases.

Critics of the international effort to stop the Ebola outbreak say the World Health Organization (WHO) and other agencies did not react fast enough.

That leads people to wonder how WHO and local health organizations will deal with the Zika virus. There is not yet a vaccine for Zika.

So far, Brazil is the country most affected by the virus.

Health organizations think Zika might be directly linked to microcephaly, a condition linked to incomplete brain development. There could be 4,000 cases of Zika-related microcephaly in Brazil. Babies with the birth defect have an unusually small head. Children with severe microcephaly often do not live long.

There is already one difference between Zika and Ebola. The WHO already declared Zika virus a global health emergency.

Governments around the world are taking steps to guard against the disease.

In the UniTed States, the Centers for Disease Control (CDC) says there are more than 50 cases of the disease nationwide. All are connected to people who recently traveled overseas.

President Barack Obama asked Congress to approve $1.8 billion in government spending to fight Zika. The money would go to the CDC and other health organizations in the U.S.

Experts say the funding is a good start. But it is only the beginning. Financial resources are important for fighting viruses and diseases.

Lawrence Gostin is a law professor at Georgetown University who specializes in public health. He says funding for research and disease containment is important for making sure the world is safe.

"Next time we might not be so fortunate as to have something we can contain," he said.

Tom Frieden is the director of the CDC. He said there still is work to be done in the way the world handles health problems.

"We need to build the systems around the world to find things when they first emerge, to stop them rapidly, and to prevent them whenever that's possible."

One way to be prepared is to enlist drug companies to help in the fight.

The Reuters news agency reports that major pharmaceutical companies like Pfizer, Merck and Johnson and Johnson are evaluating their technology and existing vaccines to see if they can help fight Zika.

Dr. Julie Gerberding is the president of Merck. She says the big drug companies can develop and manufacture vaccines for a large number of people in a short amount of time.

"We are necessary," she says. Non-governmental organizations "cannot develop vaccines and manufacture them to the kind of scale that we need."

Carol Pearson wrote this story for VOANews. Dan Friedell adapted it for Learning English. George Grow was the editor.

How do you think the world will handle future health scares? Write to us in the Comments section or on 51VOA.COM.

outbreak – n. a sudden start or increase of disease

enlist – v. to get the support and help of (someone or something)

pharmaceutical – adj. of or related to medical treatments or medicines

epidemic - n. an incident in which a disease spreads very quickly and affects many people