Eden Center Is the Heart of Vietnamese Culture in Washington

Update Required To play the media you will need to either update your browser to a recent version or update your Flash plugin.
By Dan Novak
05 November 2021


A bright red, green and yellow arch rises over the entrance to the Eden Center marketplace. Lion statues sit to the right and left, as if on guard. Smells of sweet and spicy food flow out of the restaurants, filling the air.

Almost everyone at the market is speaking in Vietnamese. Vietnamese street signs also hang around the market. And a South Vietnamese flag, yellow with three red stripes, flies overhead.

But this marketplace is not found in Vietnam. Eden Center's home is Falls Church, Virginia, a small city just outside Washington, D.C.

About 80,000 Vietnamese immigrants and Vietnamese-Americans live in the national capital area. It is the fifth largest population of ethnic Vietnamese in America. And, the Eden Center is widely considered to be the heart of that community. 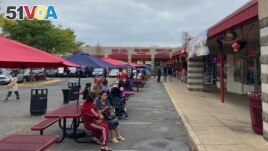 Eden Center has more than 120 businesses, most of them owned and operated by ethnic Vietnamese. Many are family businesses. There are restaurants, coffee and tea shops, and food stores. Vietnamese-run travel agencies, haircutters, accounting agencies and other businesses also can be found there.

"You can come over here and eat every kind of Vietnamese food" from all over the country, said Vinh Tran. He, his wife and other family members have worked at Phuoc Loc, a bakery and deli, since 1994. In 2013, Tran became its owner.

Cho Eden is a food store, or grocery, in the market. Its owner, Kevin Tran, arrived in Virginia in 1980. He was part of a large migration of Vietnamese refugees to America. They fled the country after years of civil war ended with the capture of the capital city, then called Saigon. Northern Vietnamese forces had defeated an opposing force from the South that was backed by the American military. The Vietnamese Embassy says up to 2 million civilians from the North and South died during the war.

Most of the refugees were from South Vietnam. Many of them left behind all their possessions. They fled across dangerous seas on small, overcrowded boats. Over time, the refugees became known as the "boat people."

Kevin and his family stayed with a relative in Falls Church when they first got to the U.S. It was just across the street from where the Eden Center would open a few years later.

Kevin's relative was able to immigrate to the U.S. because he was a member of the South Vietnamese Navy. Military connections were common for the first Vietnamese who settled in Washington, said Kim O'Connell. She is a Vietnamese-American writer who has researched the history of Vietnamese in Northern Virginia and the Washington area.

"Families of higher ranking Vietnamese officials and better connected Vietnamese were the first people out...And so that's why Washington, D.C. ended up being such a hub for so many, because of military connections."

In just five years from 1975 to 1980, more than 235,000 Vietnamese immigrated to the U.S., O'Connell said. Later arriving refugees were generally poorer and less educated than the early boat people.

In the Washington area, the immigrants soon sought to open their own stores, restaurants and other businesses. At that time, there were many empty retail spaces in Arlington, Virginia. The rent, or payments, for use of such space, were low. Many Vietnamese businesses opened in the area named Clarendon. People starting calling the neighborhood Little Saigon. 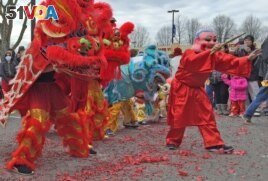 By the early 1980s, however, Little Saigon became a building site for the Washington area subway, or underground train. The new system expanded transportation service and made Clarendon a more desirable place to live. Rents greatly increased as a result, forcing Vietnamese businesses to close.

Several Vietnamese investors decided to team up to buy a failing marketplace just a few miles west of "Little Saigon." It grew into the Eden Center of today.

The name comes from the Eden Arcade, a popular marketplace in 1960s Saigon.

Cho Eden owner Kevin Tran says the Falls Church center brings back remembrances of life in Vietnam for many visitors, especially because of the food it sells.

Eden Center plays a big part in "keeping the culture together," Tran added. It holds traditional Vietnamese festivals and other cultural events throughout the year.

Researcher O'Connell, who was born and raised in the U.S., agrees. She says visiting Eden Center makes her feel more connected with her mother and Vietnamese ancestry.

"I just treasure the fact that I can kind of see her experience, her heritage with my own eyes and experience that with her...So it's always been really special to me."

Although a large majority of businesses in Eden Center are Vietnamese, Korean, Thai and Chinese businesses have moved in more recently.

The owner of Huong Binh Bakery & Deli, Le says young Vietnamese in the area are generally better educated than their parents were. They do not seek the hard jobs their parents had to take in America, he told a local public radio station.

"The kids here, when they go to school, or they get degrees there's a lot more opportunity for them, you know, than doing this."

Le said Vietnamese are like other immigrant communities in the U.S.

Eden Center shows no sign of fading yet, however. Every store in the shopping center is open except one. And business is close to the level it was before COVID-19, said Alan Frank. He is General Counsel and Senior Vice President of Eden Center owner, Capital Commercial Properties. Frank said the marketplace will remain Vietnamese for years to come.

Kim O'Connell is similarly unconcerned about the changing face of Eden Center. Change is how "Little Saigon" became Eden Center, she noted.

"I think it will be an important place for a long time to come...I'm really not that worried about changes that are happening. You know, it's kind of life, it's the way it goes."

arch — n. a usually curved part of a structure that is over an opening and that supports a wall or other weight above the opening

bakery — n. a place where bread, cakes, cookies, and other baked foods are made or sold

deli — n. a store where you can buy foods (such as meats, cheese, salads, and sandwiches) that are already cooked or prepared

hub — n. the central and most active part or place

retail — n. the business of selling things directly to customers for their own use

festival — n. a special time or event when people gather to celebrate something

heritage — n. the traditions, achievements, beliefs, etc., that are part of the history of a group or nation

trend — n. a general direction of change : a way of behaving, proceeding, etc., that is developing and becoming more common