'A Princess of Mars,' by Edgar Rice Burroughs, Part Two

Update Required To play the media you will need to either update your browser to a recent version or update your Flash plugin.
By VOA
25 June 2021


Editor's Note: Last week we brought you the first of four programs called "A Princess of Mars." Our story is from a series of books by American writer Edgar Rice Burroughs. They are science fiction stories, a mix of imagination and science.

Last week, we met John Carter who begins the story. He enters a cave deep in the desert in the state of Arizona. There something happens. He does not know how, but he has been transported to the Red Planet, Mars. 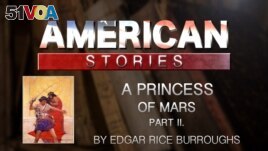 A Princess of Mars by Edgar Rice Burroughs, Part Two

He quickly learns that gravity on Mars is much less than on Earth. The lack of gravity makes him very strong. He can even jump very high without trying.

He finds a low wall that surrounds a group of eggs. The eggs are opening. Out come small, fierce-looking green creatures. When we left John Carter, a green adult creature carrying a long sharp spear was coming toward him.

Paul Thompson adapted this story was adapted for VOA Learning English. Paul Thompson and Mario Ritter produced it. Shep O'Neal was the voice of John Carter. Steve Ember was Tars Tarkas. And Barbara Klein was Sola.

And now, the second program in our series, "A Princess of Mars."

JOHN CARTER: The creature with the spear was huge. There were many other similar creatures. They had ridden behind me on the backs of large animals. Each of them carried a collection of strange-looking weapons.

The one with the large spear got down from the back of his animal and began walking toward me. He was almost five meters tall and a dark green color. Huge teeth stuck out of his face, and his expression showed much hate and violence.

I immediately knew I was facing a terrible warrior. He began moving quickly toward me with the spear. I was completely unarmed. I could not fight. My only chance was to escape.

I used all my strength to jump away from him. I was able to jump almost thirty meters. The green Martian stopped and watched my effort. I would learn later that the look on his face showed complete surprise.

The creatures gathered and talked among themselves. While they talked, I thought about running away. However, I noticed several of them carried devices that looked very much like rifles. I could not run.

Soon, all but one of the creatures moved away. The one who had threatened me stayed. He slowly took off a metal band from his arm and held it out to me. He spoke in a strange language.

JOHN CARTER: Slowly, he laid down his weapons. I thought this would have been a sign of peace anywhere on Earth...why not on Mars, too? I walked toward him and in a normal voice announced my name and said I had come in peace. I knew he did not understand, but like me, he took it to mean that I meant no harm.

Slowly, we came together. He gave me the large metal band that had been around his arm. He turned and made signs with his hands that I should follow him. Soon we arrived at the large animal he had been riding.

He again made a sign with his hands that I should ride on the same animal behind him. The group turned and began riding across the land. We moved quickly toward mountains in the distance.

JOHN CARTER: The large animals we rode moved quickly across the land. I could tell from the surrounding mountains that we were on the bottom of a long dead sea.

In time we came to a huge city. At first I thought the city was empty. The buildings all were empty and in poor repair. But soon I saw hundreds of the green warriors. I also saw green women and children. I soon learned about many cities like this. The cities were built hundreds of years ago by a people that no longer existed. The green Martians used the cities. They moved from one empty city to another, never stopping for more than a day or two.

We got down from our animals and walked into a large building. We entered a room that was filled with fierce green warriors.

It was not difficult to tell that these were the leaders of the green Martians. One of them took hold of my arm. He shook me and lifted me off the ground. He laughed when he did so. I was to learn that green Martians only laugh at the pain or suffering of others.

This huge warrior threw me to the ground and then took hold of my arm again to pick me up. I did the only thing I could do. I hit him with my closed fist as hard as I could.

The green warrior fell to the floor and did not move. The others in the room grew silent. I had knocked down one of their warriors with only my hand.

I moved away from him and prepared to defend myself as best I could. But they did not move. The green Martian that had captured me walked toward me. He said in a clear voice:

JOHN CARTER: As he spoke, he pointed to his own chest. He was telling me his name! I pointed to my chest and said my name, "John Carter."

He turned and said the word, "Sola." Immediately, a green Martian woman came close. He spoke to her. She led me to another building and into a large room. The room was filled with equipment carried by the green Martians. She prepared something for me to eat. I was very hungry.

I pointed to her and said the word "Sola." She pointed at me and said my name. It was a beginning. Sola was my guard.

She also became my teacher. In time she would become a close and valued friend. As I ate my meal, my lessons in the language of the green Martians continued.

JOHN CARTER: Two days later, Tars Tarkas came to my room. He carried the weapons and the metal armbands the green warriors wear. He put them on the ground near my feet. Sola told him I now understood some of their language. He turned to me and spoke slowly.

TARS TARKAS: The warrior you hit is dead. His weapons and the metal of his rank are yours, John Carter. He was a leader of one small group among our people. Because you have killed him, you now are a leader.

You are still a captive and not free to leave. However you will be treated with the respect you have earned. You are now a warrior among our people.

JOHN CARTER: Tars Tarkas turned and spoke softly. From beyond the door a strange creature entered the room. It was bigger than a large dog and very ugly. It had rows of long teeth and ten very short legs. Tars Tarkas spoke to the creature and pointed at me. He left. The creature looked at me, watching closely. Then Sola spoke about the creature.

SOLA: His name is Woola. The men of our tribe use them in hunting and war. He has been told to guard and protect you. He has also been told to prevent your escape. There is no faster creature in our world. And in a fight they can kill very quickly. Do not try to escape, John Carter. Woola will tear you to small pieces.

JOHN CARTER: I continued to watch the creature named Woola. I had already seen how the green Martians treated other animals. They were very cruel.

I thought, perhaps this beast can be taught to be my friend...much like a dog on Earth. I walked close to the creature and began speaking in much the same way I would speak to a dog or other animal on Earth.

I sat down next to him while I talked softly. At first he seemed confused. I believe the creature Woola had never heard a kind word.

For the next several days I gained the trust and friendship of Woola. In a few short days Woola was my friend and fierce protector. He would remain my loyal friend as long as I was on Mars.

JOHN CARTER: Several days later, Sola came to me with a look of great concern.

SOLA: John Carter...come with me. A great battle is about to take place. An enemy is coming near this city. We must prepare to fight and we must be ready to flee.

JOHN CARTER: Sola, what enemy is this?

SOLA: A race of red men who travel our world in flying machines. A great number of their machines have come over the far mountain. Take your weapons with you and hurry.

JOHN CARTER: I collected my sword and a spear. I hurried out of the building and joined a group of warriors moving toward the end of the city. Far in the distance I could see the air ships.

Suddenly a huge air ship exploded. It came down, crashing near me. Red Martians were falling from the side of the huge ship. And then it exploded!

Join us again next week at this time as we continue "A Princess of Mars" in VOA Learning English.

warrior - n. a person who fights in battles and is known for having courage and skill

device - n. an object, machine, or piece of equipment that has been made for some special purpose

armband - n. a band worn around the arm, esp. to show who you are