Editors of Famous Quotation Book Struggle to Keep Up

Update Required To play the media you will need to either update your browser to a recent version or update your Flash plugin.
By Dan Friedell
30 October 2022


A book called Bartlett's Familiar Quotations has been published in the United States since the 1850s. A quotation is something that has been said or written that people like to repeat.

It started with John Bartlett, the owner of a bookstore near Boston, Massachusetts. He selected words, or quotations, from famous people, including Benjamin Franklin, Thomas Paine and John Keats for the book.

Geoffrey O'Brien is the current editor of the 170-year-old book. He said it is hard to keep up with so many quotations because of "the speed of events" in modern times. "No matter when we went to press, we would be cutting off in the middle of the story," he said. 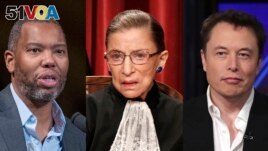 The 19th edition of Bartlett's just came out. It is the first publication since 2012 and the second under O'Brien. "With the Internet and cable news, you have the constant manufacturing of statements of one kind or another," O'Brien said. So, he tried to choose quotations that have staying power beyond current news events.

But of all the quotations, or quotes, over the last 10 years, O'Brien said the words of former President Donald Trump presented both a clear choice and a problem.

Trump said a lot of things. He said them at all hours of the day. And his news-making quotes came from everywhere, from radio and television programs to Twitter. O'Brien said he tried to look for words that were important or memorable. "It's guesswork at best since nobody knows how anything is going to turn out," he said.

One of the Trump quotes came from a speech in Nevada where he said, "I love the poorly educated!" During a debate with Hillary Clinton, he said "Such a nasty woman." And there were even some bad words from his talk with then-Attorney General Jeff Sessions that were included in an investigation report by Robert Mueller.

In the early days, the book was mostly made up of quotations from white men. But recently, the book includes words from the singer Beyoncé and the track and field athlete Usain Bolt. It even has thoughts from other languages such as Russian and Navajo, a Native American language. The Russian quote is: "Live with wolves, howl like a wolf." The Navajo part is about hunting: "Blessed am I, in the luck of the chase."

With so many new quotes, some older ones had to be removed. O'Brien said he was sad to drop comments by John Dryden, one of his favorite poets.

O'Brien also needs to keep the book to about 1,400 pages. So, once very well-known American comedians like Bob Hope and Johnny Carson are not in the latest book. Also gone are quotes from former U.S. Vice President Dan Quayle and actor Sally Field.

Singer Dolly Parton is included for the first time. Her comment about her appearance: "it takes a lot of money to look this cheap" is in the book but words from the famous song Jolene are not.

O'Brien said the goal of the book is to be "representative" but not like an encyclopedia. Not everyone can get in. He said he was sad to not be able to include a comment from U.S. civil rights activist and politician John Lewis, who died in 2020.

editor –n. a person whose job is to edit something

guesswork –n. the act of finding an answer by guessing

comedian –n. a person who performs in front of audiences to make people laugh

cheap –adj. something that is not costly