Education, Gender Influence Use of Media in Africa

Update Required To play the media you will need to either update your browser to a recent version or update your Flash plugin.
By George Grow
26 September, 2014


Recently, the Gallup research group joined with a United States government agency to produce a study about women and media in Africa. That agency is the U.S. Broadcasting Board of Governors, which oversees Voice of America and VOA Learning English.

The new study found that education and language skills greatly influence which media platform, or operating system, women most often use. The study also found that daily television usage for men and women is similar in most places. But the same cannot be said about radio, the Internet and mobile telephones.

June Simms has more on the study and its findings. 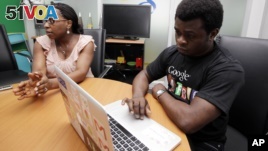 Tara Sonenshine was the main speaker at a recent conference in Washington, DC. She says the study shows that the political, economic and social involvement of women in Africa can be of great value.

"We know that if girls are educated and utilize media and have access to information, they will participate in the political arena, they will exercise their power and leverage in the economic sector and they will make a huge difference in the global economy."

Gallup researchers spoke with 1,000 people from each country. Magali Rheault works for the Gallup organization. She says opinions about media freedom are different from one country to the next.

"In Nigeria and Zimbabwe, where attitudes toward a free press are relatively low. Then you have Cote D'Ivoire, which tends to be in the middle, about half of the people think that there is a lot of freedom of the press in Cote D'Ivoire. And then the last group of countries, with Ghana, Kenya, Mali and Niger, where a strong majority of both women and men say that the media in the countries have a lot of freedom."

Sonja Glockle is the director of research at the U.S. International Broadcasting Bureau. She says that while daily use of media platforms in the countries showed differences between men and women, some did not show as much of a difference, if at all. Television is one such platform. Ms. Glockle says the reason is simple.

"In Africa, if a household has a television, it tends to be a single television household still. Televisions are usually a prized possession, and are located in a common room, and hence a lot of TV viewing is actually a communal activity."

But for radio, she notes, there are striking differences in daily use between men and women.

In general, women are less likely than men to spend a lot of time on the Internet. Sonja Gloeckle says there are many ways to communicate to women in Africa and get them involved.

But as Magali Rheault notes, reporting on issues women care about the most is also a must.

"Issues of safety, health, entrepreneurship. A lot of times, women want to see in programs is, they want to see models even if it's not from their own country, what other women have done successfully. Seventy-three percent of women who said that they would like to start their own business than work for someone else."

Researchers also talked about presenting information in vernacular or local languages. They say this could be an important tool to open up the media, especially for a country like Mali. There, only 15 percent of women speak French, the official language.

*This story was based on a report from VOA's Mariama Diallo. George Grow wrote it for Learning English. Ashley Thompson was the editor.

agency – n. an organization that is part of a larger group