Experts: El Nino Could Be the Strongest on Record

Update Required To play the media you will need to either update your browser to a recent version or update your Flash plugin.
By Jonathan Evans
15 November, 2015


Weather experts say this year could be one of the strongest El Niño events in recorded history.

Experts say El Niño could mean severe weather conditions in many parts of the world. In eastern Africa, for example, Kenya and Uganda are preparing for possible flooding. Yet two countries further south, South Africa and Malawi, are already dealing with extremely dry weather.

El Niño is Spanish for "the child." It usually begins in December, near the celebration of the birth of Jesus Christ. In fact, the weather event was named in his honor. 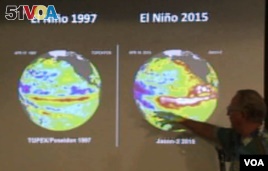 El Niño develops when winds off the west coast of South America weaken. This permits warm water in the western Pacific to expand toward the east and the Americas. At the same time, clouds and rain over the warm water move east, too.

El Niño conditions normally appear only about two times every 10 years. Usually, El Niño conditions continue for about 12 to 18 months. They bring warm weather to some areas. These areas become wetter than normal, while others become drier.

The United Nations Children's Fund warns that many people are at risk from hunger, disease and water shortages resulting from El Niño. In east and southern Africa, it warns, up to 11-million children could be affected.

Onesmus Ruirie is a weather expert with the Kenya Meteorological Department. He explains how these different weather events can result.

"What happens is that during an El Niño, the weather pattern changes. And for East Africa, we have a very warm equatorial Indian Ocean. And if the Indian Ocean is very warm due to evaporation of the ocean water, we have that water blown to the continental East Africa. And that is why you have a lot of rain in East Africa. But to the south, that denies them the moisture. So that tends to be dry in the southern Africa."

Weather changes caused by El Niño depend on the strength of the condition. In the early 1980s, a strong El Niño was linked to dry weather in Australia and Asia, rain and flooding in South America and high temperatures in much of the United States. Ten years later, a smaller El Niño caused trouble in parts of the U.S. It was linked to severe floods in the Southeast and the Middle West.

Tom Di Leberto is a meteorologist at the National Oceanic and Atmospheric Administration in Washington, D.C. He says this year could be the third strongest El Niño on record. But, we will not know for sure until early 2016 when all the weather records are examined.

Jonathan Evans wrote this story for Learning English with additional reporting from Jill Craig. George Grow was the editor.

moisture - n. a small amount of a liquid (such as water) that makes something wet or moist