El Nino Could Cause Famine to Return in Somalia

Update Required To play the media you will need to either update your browser to a recent version or update your Flash plugin.
By Jim Dresbach
26 April, 2016


The weather changer known as El Nino has left countries in east Africa in danger of famine, according to a group of nongovernmental organizations (NGOs).

The Somalia NGO Consortium said Tuesday that El Nino is creating drought and food shortages. The group released the statement to coincide with a United Nations meeting on humanitarian needs related to the effects of El Nino.

El Nino is the natural warming of parts of the Pacific Ocean that changes weather worldwide. El Nino occurs every several years and lasts close to a year, according to the Associated Press. 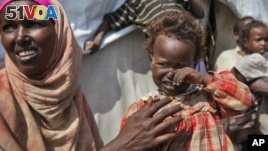 Nasteho Hassan Mohyadin, 3, and her mother Farhid Ali Mohamed sit outside their small makeshift tent in a camp for those displaced by 2012 famine or by conflict, in Mogadishu, Somalia.

El Nino impacts weather systems around the globe. For example, some places receive more rain, while others receive no rain or snow.

But this year, El Nino has severely reduced rainfall in Somalia, Ethiopia and Djibouti. As a result, close to 19 million people in the Horn of Africa region face food shortages, according to the United Nations Office for the Coordination of Humanitarian Affairs.

Cash, cash vouchers and food have already been issued to Somalians. But the Somalia NGO Consortium says more help is needed. The Consortium is calling for "urgent humanitarian action."

Somalia suffered a deadly famine from 2010 to 2012. More than 250,000 people died because of drought and food shortages. NGOs are hoping to avoid a similar – or even larger – disaster this year.

The staff at VOA News wrote this story. Jim Dresbach adapted this story for Learning English. Kelly Jean Kelly was the editor.

El Nino – n. the natural warming of parts of the Pacific Ocean that changes weather worldwide

consortium – n. a group of people or companies that agree to work together

voucher – n. a document that gives you the right to get something, such as a product or service, without paying for it