Update Required To play the media you will need to either update your browser to a recent version or update your Flash plugin.
By Jonathan Evans
31 March, 2018


In 1975, Venezuelan musician Jose Antonio Abreu created a network of music education programs for children. It became known as El Sistema. As the director of El Sistema, Abreu was able to gain government support for the network, and turn it into one of Venezuela's model programs.

Mendez said the program must overcome Venezuela's severe economic crisis. The crisis has forced hundreds of musicians to leave the country.

El Sistema now includes about 300 community schools. The network has given children in poor neighborhoods a chance to study classical music. It has produced world-famous musicians, including the director of the Los Angeles Philharmonic, Gustavo Dudamel. 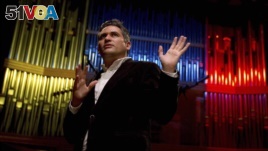 Eduardo Mendez, newly named executive director of the National System of Youth and Children's Orchestras of Venezuela better known as El Sistema, or The System, speaks during an interview at an auditorium in Caracas, Venezuela, March 26, 2018.

But Mendez says leading the orchestra network through Venezuela's social and economic crisis will not be easy.

He says that 8 percent of the program's teachers have recently left Venezuela to seek a better life in other countries. The network's highly praised Simon Bolivar Youth Orchestra has lost 42 percent of its musicians over the past six months. Most of those positions have been filled with younger musicians.

Mendez said, "It hasn't been easy to convince people to stay. Many of these people are leaving in search of economic stability."

Mendez worked with Abreu for 15 years. He said his goal will be to strengthen beginner music programs and explore new types of music for students to learn.

El Sistema says 980,000 children and young musicians are currently part of its programs throughout Venezuela.

Moving forward, Mendez will have to avoid conflicts between musicians and Venezuela's government. Critics have accused him of using the music program as a propaganda tool.

Tensions between El Sistema and Venezuelan officials developed in 2017. At that time, Gustavo Dudamel criticized President Nicolas Maduro's attempt to form a national assembly of mostly government supporters. Some critics viewed the move as another step toward dictatorship.

Maduro asked Dudamel to "not attack those of us who have been crucial to the expansion of the [musical] movement."

Venezuelan officials then cancelled two El Sistema trips through the United States and Asia. Dudamel was to lead the series of performances. No official explanation was given as to why the trips were cancelled.

Mendez said Dudamel will continue to be El Sistema's creative director. Dudamel is expected to lead several concerts in Venezuela in August and September. He may also take part in an El Sistema exhibition in May at a United Nations meeting in Vienna.

Reporters asked Mendez whether he would permit his musicians to voice their political views. He said he would not censure anyone.

Jonathan Evans adapted this story from an Associated Press report. Ashley Thompson was the editor.

convince – v. to cause (someone) to agree to do something

censure – v. to officially criticize someone or something strongly and publicly

exhibition – n. an event at which objects such as works of art are put out in a public space for people to look at; a public show of something

propaganda – n. ideas or statements that are often false or exaggerated and that are spread in order to help a cause, a political leader, a government, etc.