Election 2012: Economy, Immigration and the Role of Government

Update Required To play the media you will need to either update your browser to a recent version or update your Flash plugin.
By VOA
04 November, 2012

From VOA Learning English, welcome to THIS IS AMERICA in Special English. I'm Faith Lapidus.

And I'm Christopher Cruise. This week our program is all about elections Tuesday in the United States.

The Republican Party is expected to keep its majority in the House of Representatives in the next Congress. Republicans would need to gain four seats to take the Senate from the Democrats.

A voter checks her ballot during early voting in Miami, Florida

The presidential race is very close right now. Barack Obama says he needs a second and final term to rebuild an economy that was broken when he came to office. Former Massachusetts governor Mitt Romney says his business experience has given him the skills to get the job done.

Whoever wins will govern the world's largest economy for the next four years. The value of all goods and services produced in the United States -- the gross domestic product -- is about one-fourth of the world total. Desmond Lachman is an economist at the American Enterprise Institute.

"We saw that clearly in the two thousand eight-two thousand nine great economic recession, events that occurred in the United States banking system reverberated right through the globe."

"On day one, I will label China a currency manipulator, which will allow me as president to be able to put in place, if necessary, tariffs where I believe that they are taking unfair advantage of our manufacturers."

President Obama says the key to a strong economy is to bring manufacturing jobs back to the United States. He says Mr. Romney is the wrong person to do it. 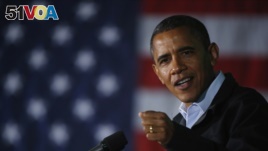 Obama speaking in Ohio
"Keep in mind that Governor Romney invested in companies that were pioneers of outsourcing to China. Governor, you're the last person who is going to get tough on China."

But China is not the only issue. The debt crisis in Europe has reduced demand for American goods. Desmond Lachman says deepening problems in the countries that use the euro could further slow growth worldwide.

"As a person that was unemployed I was able to get health insurance for myself and my son because of his initiative."

But support for the president has weakened among some black voters because of the economic downturn. Andrew Marshall was out of work for two years.

"I just recently got back to work about eight months ago, so the progress is very slow at this point and with people its more of a frustration factor where people like figure it should have been done maybe two years ago."

Mitt Romney has appealed to black voters to support his campaign.

"If you want a president who will make things better in the African-American community you are looking at him."

Some voters say President Obama has not done enough to deal with concerns in the black community. Olga Wright lives in North Carolina. It is one of the few politically unpredictable "swing" states that could decide the election.

Next we turn to the issues of another group: small business owners. Larry Guinn owns a factory in North Carolina. He says he worries about the future.

"I am not going to hire many people. I just see more and more unemployment in the country, and that is not good for America."

Jeremy McKinney is an immigration lawyer in North Carolina. He thinks the country is headed in the right direction.

"From our vantage point we see no reason to change the captain of the ship now."

Mr. Guinn is a Republican who supports Mitt Romney.

"If we do not get someone in there who knows and understands how businesses operate and what is required of them to be profitable and stay in business, I am not sure how much longer small businesses are going to be able to hang on."

Mr. McKinney is a Democrat. He says his law office suffered its worst financial year in two thousand eight. But he says times are better now, and he credits President Obama's policies.

"Each year we have been able to climb back. And this year has been our best year ever in the history of this law firm. We can see that the president and this administration and its policies; we’re seeing this economic recovery in action."

Mr. Guinn says Governor Romney's plan to cut business taxes will permit small business owners to hire more workers. But he worries that President Obama's health-care reform law will cost his company more. He currently does not provide health insurance for his workers.

"If I am at the point where I have to furnish insurance for all the employees that I would put on my solid payroll, I would almost have to use more casual [part-time] workers because I just could’nt afford the insurance program and still stay in business and make a profit."

Mr. Romney wants to end the health care law. But Jeremy McKinney says the law will help his business by providing tax credits to reduce the costs of health coverage for his employees.

"With less than fifty employees we pay a lot more for our health insurance than large employers. That will hopefully change in twenty-fourteen as we get to combine with other small businesses to negotiate health-care contracts with insurance companies."

Both small business owners agree on at least one thing. They are both hoping for better economic times ahead.

Barack Obama and Mitt Romney both say the country’s immigration system must be reformed. But they disagree about how to do it. Immigration was one of the issues discussed last month during the second presidential debate.

Mr. Romney supports the idea of self-deportation -- illegal immigrants leaving the country voluntarily. But Katherine Vargas at the National Immigration Forum, a private group, says he needs to explain his immigration proposals in more detail.

"He says he's pro-immigration solutions but we don´t know what type of solutions. Self-deportation is not a solution, is simply make life as hard as possible for immigrants so they return to their countries. We know that he supports permanent residency for foreign students that graduate with science and technology degrees, but we don´t know what he´s going to do with the eleven million undocumented immigrants that are currently in the country."

President Obama has been criticized for not keeping his campaign promise to present a broad immigration reform bill during his first year in office. Doris Meissner, a senior fellow at the Migration Policy Institute, and Ms. Vargas explain what that means.

"What President Obama is saying is that he is four square in favor of comprehensive immigration reform, in other words, a generous package that combines enforcement measures with the possibility of legal status for the unauthorized population that's in the United States."

"But even so we haven´t seen details on how he's going to accomplish that because he also promised it during his first presidential campaign, the most important thing we need to know is how he will win the Republican support, because he needs those Republican votes to have a comprehensive immigration reform bill approved."

Americans will not just be choosing a leader for the next four years. They will also be deciding, in effect, what role they want the federal government to play in their lives. Steve Smith, a political scientist at Washington University in St. Louis, explains.

George Nation is a professor of finance and law at Lehigh University in Pennsylvania. He says the differences of the two candidates are deeply philosophical.

Election Day is not until Tuesday, but many Americans have voted already. The National Conference of State Legislatures says two-thirds of states now let people vote early-- in some cases, as early as forty-five days before an election. President Obama broke with tradition and voted early, casting his ballot in Chicago on October twenty-fifth.

But no matter when Americans vote for president, the popular vote does not decide the winner. On December seventeenth members of a group called the Electoral College will meet in each state to select the president and vice president. Under the Constitution, each state has a number of electors equal to its number of senators and representatives. Each state has two senators; the number of representatives is based on a population count every ten years.

In forty-eight of the fifty states, the winner of the popular vote receives all of the state's electoral votes. In Nebraska and Maine the electors are divided among the candidates based on the popular vote in each congressional district.

The District of Columbia has three electors, for a current total of five hundred thirty-eight in the Electoral College.

The next president will need a simple majority of two hundred seventy electoral votes. If there is no majority, the Constitution calls for the House of Representatives to elect the president. This has not happened in more than two hundred years.