Update Required To play the media you will need to either update your browser to a recent version or update your Flash plugin.
By Bryan Lynn
18 February, 2018


A ban on electric bicycles in New York City is hurting delivery workers who depend on them to earn a living. Many of the workers are immigrants.

Electric bicycles, or "e-bikes," have foot-powered pedals like other bicycles. But they also have electric-powered motors to assist riders in moving the bike forward. Most e-bikes reach speeds of about 32 kilometers an hour, but some can go much faster.

Aimin Liu often uses an e-bike to deliver up to 40 Chinese food orders all across Manhattan each day. He is 60 years old. He says an e-bike makes his job much easier.

"My legs are no good. I'm not capable of riding a regular bike. Both of my feet hurt. I have arthritis on both sides." 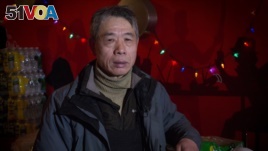 Aimin Liu, 59, says he is able to continue delivering meals because of his e-bike. "My legs are no good," he tells VOA. "I'm not capable of riding a regular bike."

Although it is legal to own e-bikes in New York City, it is not legal to operate them. Officials there cite the dangerous use of e-bikes on streets and sidewalks as reason for the ban. Last year, the city announced severe measures meant to hold e-bike riders and restaurants that employ the riders responsible.

E-bike operators can now be fined $500 for violating the ban. Police can also seize the bikes.

Aimin Liu says he fears he might physically collapse if he tried to complete his daily work using a normal bicycle. He also estimates he could only deliver about half the number of orders.

Many of New York's delivery workers are Chinese immigrants in their 50s and 60s. Their job requires them to work quickly and for long hours in order to earn enough money to live on.

Delivery worker Deqing Lian said it is important to perform quality work because their job also depends on tips.

"Sometimes we go to places that are very far. If we're too slow the customers will be unhappy."

He added that when delivery workers are too slow, some people refuse to pay for the food. This makes the workers' supervisors angry.

Liqiang Liu is an e-bike delivery worker and spokesperson for the New York Delivery Workers Union. He says being caught violating the ban and having the bike seized would cause costly delays for workers.

Do Lee is with the Biking Public Project, which provides assistance to bicycle-related workers in New York City. He says the city's ban on e-bikes is unfairly targeting low-paid workers who largely come from the city's Latino and Asian communities. He does not accept the argument that e-bikes present a danger to citizens.

However, many New Yorkers are quick to blame e-bike riders for not being safe.

New Yorker Bill McGowan says he has mixed feelings about e-bikers in the city.

"I'm very sympathetic because I know how hard they work and how they have got to be as productive as they can possibly be. But they should have some more awareness and consideration for pedestrians."

Ramon Taylor and Ye Yuan reported this story for VOA News. Bryan Lynn adapted it for Learning English. Ashley Thompson was the editor.

pedal – n. control on a piece of equipment that is pushed with a foot

capable – adj. able to do something

arthritis – n. illness that causes parts of the body where bones meet to become painful and often big

restaurant – n. place where you can buy and eat a meal

tip – n. an extra amount of money given to someone who performs a service for you

customer – n. someone who purchases a product or service

awareness – n. the state of knowing that something (a situation, condition, or problem) exists

pedestrian – n. a person who is walking in a city, along a road, etc.