Update Required To play the media you will need to either update your browser to a recent version or update your Flash plugin.
By Jill Robbins
20 March 2020


This week we answer a question from Angus in China.

"I'm Angus, a big fan of VOA English from China. Could you please tell me the difference among electric, electrical and electronic?" – Angus, China 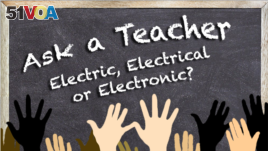 Thanks for writing to us. These days, many people are using electronic ways to communicate with others, so this is a good question. Let us start with the word "electric," which comes from the noun electricity. "Electric" is an adjective; that is, a word used to describe a noun. Its simple meaning is "operated by electricity." Here are two examples.

There is an electric fence around the cows in that field.

Electric lights allow us to read at night.

You can also use "electric" to describe something exciting or full of energy, like a feeling or a performance.

The dancers gave an electric performance.

Now, let's turn to the word "electrical." "Electrical" is also an adjective, but we mostly use it to mean "related to electricity." For example, you might say:

The word "electrical" also can be used in a general sense:

His kitchen is full of electrical appliances.

However, you cannot use the word "electrical" to describe a specific noun, like a car:

That is a new Tesla electrical electric car.

Finally, compare what we have just described to the word, "electronic." "Electronic" is an adjective. It describes something that operates through the use of many small electrical parts, such as microchips. In "electrical" devices, there is movement of a current, while "electronic" devices involve the movement of subatomic particles called electrons. Here is how one might use the word in a sentence:

In China, almost everyone makes electronic payments when they go shopping.

You may have an electric toothbrush now, but when you get an electronic toothbrush, it might tell you exactly when to stop using it.

Jill Robbins wrote this story for Learning English. George Grow was the editor.

allow – v. to let or permit

kitchen – n. a room in a home or building where food is prepared

appliance – n. a piece of equipment designed to perform a job or operation; machine

microchip – n. a group of tiny electronic circuits that work together on a very small piece of hard material (such as silicon)

shopping – n. the action of purchasing goods from stores