Update Required To play the media you will need to either update your browser to a recent version or update your Flash plugin.
By VOA
11 December, 2014


Some of the world's biggest animals are harming villagers in far north Cameroon. The people say hundreds of elephants and hippopotamuses have caused major damage to farms and destroyed their villages. They say all this took place during the past three months.

Cameroon's government says the elephants and hippopotamuses have killed several people. But officials and wildlife organizations warn against killing the animals. Both are protected species.

Ledou Ahmadou of Bougay Village says he has lost all of his crops to the animals. He says the elephants and hippos have destroyed all his sorghum and onions, and continue to attack people in their villages. And he says the elephants are destroying property in at least five villages in his area every day.

The animals are leaving the overcrowded 4,000 hectares of Kalfou Wildlife Park for areas with more food. 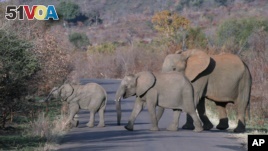 People in Cameroon say hundreds of elephants and hippopotamuses have caused major damage to farms and destroyed their villages.

Nkwenti Simon Doh is the most senior administrative official in the area. He says increased human population is responsible for changing parts of the park to farms and villages. That means reduced natural resources.

Mr. Doh says the elephants and hippos from Gere Lake, near the park, have already killed several people. He says wildlife officials have killed three hippos that carried out raids. He says he called on villagers not to kill the animals. He notes they will enjoy huge social and economic benefits if they help protect the enormous animals.

Alexandre Brecher is with the World Wildlife Fund for Nature. He says the elephant population in the rainforest has decreased by 60 percent in the past 10 years. He says people must understand that if they do not stop killing the elephants, there might not be wildlife in the forest in 10 or 20 years

"Cameroon and the wider Congo basin is one of the world's natural treasures. It is the second largest rain forest in the world and we are losing our big mammals, our great emblematic mammals like the elephants."

Sone Koke is with Trade Response Assessment and Priority Setting, a non-governmental organization. He rejects claims that international organizations prefer protecting animals to attending to the needs of the people.

"Well, you know that here is always this misconception that structures, organizations or even some government agencies are more interested in animals than people. Of course not! We are talking of global resources. Maybe in the next 20 years we will not have elephants in Cameroon. So how are we going to act on that? Black rhinos are almost extinct. So that is what we are talking about. If nothing is being done, we are going to lose all our resources."

Wildlife groups have been urging Cameroon to declare a policy of absolutely no killing of animals to prevent their possible disappearance from Earth. I'm Jeri Watson.

species - n. a group of animals and plants that are similar

resources – n. things a country has that can increase its wealth

benefits – n. a good or helpful result or effect

prefer – v. to like better than someone or something else