Update Required To play the media you will need to either update your browser to a recent version or update your Flash plugin.
By Anne Ball
29 September, 2016


Businessman Elon Musk says his company is building a powerful, reusable rocket and a spaceship that may travel to the planet Mars.

The spacecraft would eventually be able to take as many as 100 people and their equipment to the red planet, he said.

The entrepreneur announced his plan on Tuesday at the 67th International Astronautical Congress in Guadalajara, Mexico.

Elon Musk is the founder of the American company SpaceX. It designs, manufacturers and launches rockets and spacecraft.

During his speech in Mexico, Musk did not talk about the September 1 explosion of SpaceX's Falcon 9 rocket and the satellite it was carrying.

But Musk did say he wants to establish a city on Mars. He said the planned city would be able to support itself -- complete with the ability to make iron, as well as pizzas.

Musk wants human beings to be able to live on more than just one planet. And he said the best way to do that is to first colonize Mars. He wants many people to be able to travel to the red planet.

"Really the key is making this affordable to almost anyone who wants to go..." 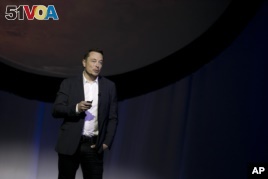 Reusing rockets and spaceships will help lower the cost for each person, he explained. The spaceships would also be able to refuel in orbit. He suggested the production of methane and oxygen on Mars would provide fuel for the trip back home.

Musk says a self-supporting colony on the planet would require about 1 million people. To get them there and to build the colony, it would take between 40 and 100 years -- or about 10,000 flights with 100 people per flight.

Musk said the trip would last between 80 and 150 days. Eventually, the cost would go down.

"The very first flights will be fairly expensive, but the architecture allows for a cost per ticket of less than $200,000."

No date has been set for the first flight. But Musk said he wanted to send the first manned mission to Mars by 2024. He added that he plans to start transporting supplies to the planet as soon as 2018.

Musk invited other companies to join the Mars effort, which reportedly would require about a $10 billion investment.

The American space agency NASA has its own program for sending astronauts to Mars. NASA will be using its own equipment. Currently, the space agency does use Space X for taking supplies to the International Space Station.

Musk, a wealthy entrepreneur, is also known for his Tesla Motors company, which makes electric cars.

George Putic wrote this story for VOA News. Anne Ball wrote it for Learning English. George Grow was the editor.

affordable – adj. to be able to pay for something

architecture – n. the method or style of building

ticket – n. a piece of paper that allows you to travel on a vehicle

mission – n. a job that someone is given to do