Update Required To play the media you will need to either update your browser to a recent version or update your Flash plugin.
By Gregory Stachel
25 September 2022


Job listings from Elon Musk's Texas-based Tesla company show that Tesla plans to deploy thousands of human-like, or humanoid, robots within its factories.

The robots are being called Tesla Bot or Optimus. Musk says the number of Tesla Bots could one day reach millions around the world.

Musk said at a TED Talk that robots could be used in homes, do household work, and care for older people. They could even become a friend or adult partner. 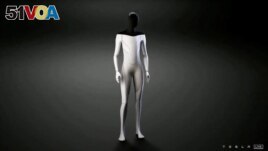 A humanoid robot developed by Tesla, known as Tesla Bot or Optimus. (Tesla/Handout via Reuters)

Musk also said the robot business may be bigger than Tesla's car business. Musk has been marketing Tesla as a company that does much more than just make self-driving vehicles.

At its "AI Day" on September 30, Musk said Tesla will show an early kind of robot from its project Optimus. The name for the project comes from a film series about robots called Transformers. Musk said production on the robots could start next year.

Robot experts, investors and researchers spoke with Reuters about the robot news. They said Tesla faces doubt among the public that the high cost of "general purpose" robots would be worth it.

Tesla already has hundreds of robots working in its production of its cars.

Humanoid robots have been in development for many years by car companies Honda and Hyundai's Boston Dynamics. One problem with humanoid robots is that they have trouble with unpredictable situations.

Shaun Azimi is the lead of NASA's Dexterous Robotics Team. He told Reuters, "Self-driving cars weren't really proved to be as easy as anyone thought. And it's the same way with humanoid robots to some extent."

He added, "If something unexpected happens, being flexible and robust to those kinds of changes is very difficult."

Experts say that even if Musk's robots show simple abilities, it will be hard for him to show the public that robots are as able as humans.

Nancy Cooke is a professor in human systems engineering at Arizona State University. She said that in order for Tesla to succeed, it will need to show robots doing several unplanned actions.

She said, "If he just gets the robot to walk around, or he gets the robots to dance, that's already been done. That's not that impressive."

Tesla did not answer Reuters' request for comments.

At first, Musk said Optimus will be used to perform boring or dangerous jobs, including moving parts around factories.

Musk has said that humanoid robots do not have enough intelligence to operate in the real world without being clearly told what to do. But he said Tesla can use its knowledge in AI and important robotic parts to develop and mass-produce smart, less costly, humanoid robots.

Tesla plans to employ many new people to work on humanoid robots. There are about 20 job listings related to the "Tesla Bot," including jobs for designing important robot parts.

Musk and his company have had their own problems with robots. In 2018, Musk found a robot had difficulties dealing with material that human hands could easily work with. He said the costs of having someone keep up the robots was much higher than just having a human put the product together.

Gene Munster is a partner at the capital firm Loup Ventures, which holds Tesla stocks. He said, "Investors are not excited about Optimus." He added that there is a low possibility that the product will work on a larger scale. And, he said, humanoid robots are much more difficult to make than self-driving cars.

artificial intelligence (AI) – n. the development of computer systems with the ability to perform work that normally requires human intelligence

robust – adj. successful or impressive and not likely to fail or weaken

taxi – n. a car that carries passengers to a place for an amount of money that is based on the distance traveled

scale – n. the size required to solve a problem

excited – adj. very enthusiastic and eager about something