Elon Musk Suggests Plan to Create an ‘Everything App’

Update Required To play the media you will need to either update your browser to a recent version or update your Flash plugin.
By Bryan Lynn
10 October 2022

In a recent tweet on the subject, Musk wrote: "Buying Twitter is an accelerant to creating X, the everything app." Musk did not provide details on his brief statement. The tweet has led many people to question what he meant by "the everything app."

Reuters reporter Sheila Dang sought to explain what kind of app this might be. She noted that everything apps, often called "super apps," have become very popular in Asia. Because of this success, technology companies across the world have tried to copy the idea. 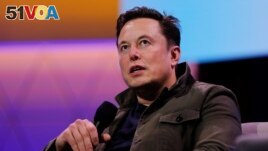 What is a super app?

A super app, or what Musk calls an "everything app," has been described as one that offers a series of services for users. This could include messaging, social networking, direct payment services and online shopping.

Scott Galloway is a New York University professor of marketing and co-presenter of the technology podcast Pivot. He said last year that so-called mega apps are widely used in Asia because mobile devices are the main way people get on the internet.

What are some examples of super apps?

One industry estimate shows that Chinese super app WeChat has more than 1 billion monthly users and is a huge part of daily life in China. People can use the app to call up a ride-share or taxi, send money to friends and family or make payments at stores. In 2018, some Chinese cities began testing WeChat for an electronic identification system that would be linked to users' accounts, the South China Morning Post reported.

Why does Elon Musk want to make a super app?

During a question-and-answer event with Twitter employees in June, Musk noted that there is nothing like a super app like WeChat outside of Asia. "You basically live on WeChat in China," he said, adding that he saw a chance to create such an app.

Adding more tools and services to Twitter could also help Musk reach his high growth goals for the company. During his meeting with employees, Musk said he wanted Twitter to grow from its 237 million users to "at least a billion."

Some of Musk's phone records were released during his legal disputes with Twitter over buying the company. The records showed that people close to the billionaire had repeatedly texted about the idea of adding digital payments to Twitter.

Have other U.S. tech companies tried this?

The parent of messaging app Snapchat, Snap Inc., introduced in the past a direct payment system called Snapcash. But the company ended the service in 2018. Snap also expanded into mobile gaming, but recently ended that offering as part of a cost-cutting plan.

Meta's Facebook and Instagram services have also tried to expand beyond social networking and messaging into online selling activities.

Bryan Lynn wrote this story for VOA Learning English, based on reports from Reuters and The Associated Press.

accelerant – n. something that makes something move faster

deliver – v. to transport goods from one place to another