It's an Emergency in Any Language

Update Required To play the media you will need to either update your browser to a recent version or update your Flash plugin.
By VOA
30 August, 2014


In most countries, people can make a telephone call to ask for medical or police help using just three numbers. In the European Union, the number is 1-1-2. Some Asian countries use 9-9-9. In North America, the number is 9-1-1.

Wherever you are in the world, when you call for help, you do not want the person answering to say "I don't understand you."

In the United States, most of the workers who answer calls for emergency help speak just one language -- English. But many people in the United States, and people coming here from other countries, do not speak English. So VOA went to a center where requests for help are received to find out what happens when the person calling speaks a language that emergency workers do not understand.

We are about to hear a request for help. The phone call was answered by a worker in the Willamette Valley 9-1-1 Center in Salem, Oregon, in the northwestern United States. But it could have been almost anywhere in America -- in most urban areas, workers receive requests for emergency help every day in a language other than English. 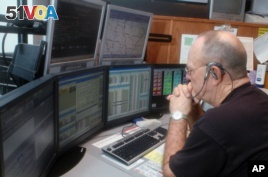 In this 2007 file photo, emergency dispatcher Larry Holmes responded to a call in Versailles, Missouri.

Dispatcher: "Do you have an emergency?"

Dispatcher: "Do you have an emergency?"

Now, the worker will call someone at an agency that employs people who speak the caller's language. Every 9-1-1 center in the northwestern United States works with such agencies, called emergency translation services.

TeleLanguage: "Thanks for calling. What language?"

Computer voice: "Thank you. Your call may be monitored or recorded for quality..."

On this call, it takes almost one minute for a translator to be connected to the person calling for help.

Andrea Tobin is a training manager at the emergency center and a longtime worker there. She says the wait can be difficult for both the emergency workers and the person who needs help.

"We get pretty tense, especially if we know it is a medical call -- or this person that is in obvious distress."

"When it is Spanish, it is pretty quick and easy for us to understand. When it is a different dialect, it becomes more complicated for us because we don't recognize them all. And then they put us on hold while they get an interpreter for the language that we need. That can sometimes be very quick. Sometimes it is 30 seconds or a minute."

The most-common language needing translation is Spanish. Others include Russian, Vietnamese, and Chinese. Some managers of emergency call centers in urban areas of the northwestern United States say they are experiencing an increase in requests for help from people speaking languages heard in African and Middle Eastern countries.

Translation companies like Telelanguage and LanguageLine say they can help people in 200 languages.

Mr. Buchholz says centers like his try to employ people who speak more than one language, but he says it is not easy to find these workers.

"It's really tough to require a second language as a requirement to work for us. While it is important -- we do pay a bonus -- the volume isn't significant enough for us to have that as an exclusive requirement for hiring."

A man has called the Salem, Oregon 9-1-1 center for help. He is speaking in Spanish. He says two men in a car are chasing him. The interpreter is listening to the man, then talking to the emergency worker, who will send police to help the man once they know where he is.

Interpreter: "I am standing right at the corner of One Way and Lee Street."

Dispatcher: "We don't have a One Way."

It took the three people another minute to find out that the man was on the corner of Lee and 12th Street. Lee Street is a one-way street -- cars are only permitted to drive on the street in one direction. The caller thought that was the name of the street.

Interpreters who join calls like this may be in another state. The companies that employ them tell the workers they can do the work from their home. These companies also help business call centers, banks, schools and courts.

In the emergency we just heard, the police were able to quickly help the man who called.

Several managers of emergency call centers say it is important to be able to say the name of your country and your language in the language of the country you are visiting or living in. That may save you important time.

Word in the News

monitor - v. to watch, observe, listen to or check for a special purpose over a period of time

tense - adj. having fear or concern

distress - n. a state of danger or desparate need

significant - adj. large enough to be noticed or have an effect; very important