Update Required To play the media you will need to either update your browser to a recent version or update your Flash plugin.
By Mario Ritter
07 March, 2018

The observance falls on March 8.

International Women's Day events around the world are aimed at supporting women's causes. A major campaign theme this year is #PressforProgress. 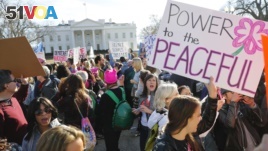 A group called Women for Women International operates in countries affected by war. Its communications director, Teisha Garrett, told VOA Learning English by email that the group has planned International Women's Day activities in places "like the Kurdistan Region of Iraq and the Democratic Republic of the Congo." She said it is organizing marches and programs to celebrate the power of women.

Some activists note findings from a report on gender equality by the Swiss-based World Economic Forum last November. The report found that it will take more than 200 years for women to reach what it calls gender parity with men.

In a short video, United Nations Secretary General Antonio Guterres spoke about International Women's Day. He said, "The empowerment of women is our most important objective." Guterres called the issue of empowerment the greatest human rights challenge of our time.

Recent movements like #MeToo and TimesUp have encouraged people to publicly share their stories of sexual harassment and abuse. Many women have come forward to accuse well-known and powerful men in the industries of film, politics and more.

Teisha Garrett of Women for Women International says her group is organizing its own social media campaign. The group is "asking men and women to send a #MessageToMySister."

Garrett explained, "People are submitting a message online at womenforwomen.org or sharing a message of support on social media. She said the group plans to share the messages with "thousands of women...around the world."

A day with a long history

International Women's Day has been observed in one way or another for more than 100 years.

Possibly the earliest observance took place in the United States in 1909. A group of about 15,000 women marched through the streets of New York City to demand shorter work hours, better pay and voting rights. Since then, the event has developed into "a collective day of global celebration and a call for gender parity."

In 1911, people in Austria, Denmark, Germany and Switzerland celebrated the first International Women's Day on March 19. More than one million women and men attended demonstrations in support of a woman's right to work, vote, study and hold public office.

The United Nations officially recognized International Women's Day for the first time in 1975.

theme – n. the main subject being discussed or dealt with

parity – n. a state of being equal

challenge – n. a test or a difficult problem to be dealt with

harassment – n. making repeated attacks against someone or something

submit – v. to present or propose something for consideration to someone else

achievement – n. the result of an effort; success