Update Required To play the media you will need to either update your browser to a recent version or update your Flash plugin.
By Bryan Lynn
29 August 2022


The American space agency NASA postponed the launch of its new moon rocket on Monday because of an engine problem.

The launch of NASA's Space Launch System, or SLS, was called off about 40 minutes before launch time at Kennedy Space Center in Cape Canaveral, Florida.

NASA said on its website that the problem was linked to difficulties cooling the rocket's main engines to the needed temperature for liftoff. The agency said engineers were continuing to gather data and carry out tests on the engines. 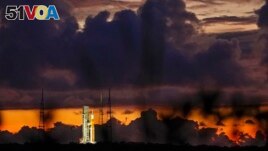 The NASA moon rocket stands ready at sunrise on Pad 39B before the Artemis 1 mission to orbit the moon at the Kennedy Space Center, Monday, Aug. 29, 2022, in Cape Canaveral, Fla. (AP Photo/Brynn Anderson)

The next launch possibility has been set for Friday, September 2.

NASA has described the 98-meter SLS as the most powerful rocket ever built. It is part of the agency's Artemis program, which aims to land the first woman and first person of color on the moon.

Artemis seeks to land American astronauts on the moon no earlier than 2025. It would be the first moon landing by astronauts since NASA's Apollo 17 mission in 1972. Artemis also calls for establishing a long-term base on the moon that could one day launch astronauts to Mars.

NASA is calling the first launch of the SLS rocket Artemis 1. The rocket will carry NASA's Orion spacecraft, or capsule, on a test mission to fly around the moon.

There will be no astronauts on the spacecraft during the test flight. Instead, three mannequins will be placed inside the crew capsule. They will be connected to a series of sensors designed to measure radiation and movements during the mission.

The main purpose of the SLS mission is to test the system for a future flight that will include actual astronauts. NASA has said that if everything goes well with Artemis 1, a trip involving astronauts could be launched as soon as 2024.

SLS has been under development for more than 10 years. It has experienced a series of costly production delays.

At the end of the mission, Orion is expected to hit the atmosphere at 40,000 kilometers per hour on its way to a parachute landing in the Pacific Ocean.

The Associated Press, Reuters and NASA reported on this story. Bryan Lynn adapted the reports for VOA Learning English.

capsule – n. the part of a spacecraft that carries astronauts