The Music of Movable Phrases

Update Required To play the media you will need to either update your browser to a recent version or update your Flash plugin.
By John Russell
13 October, 2016

"The Rise and Fall of Ziggy Stardust and the Spiders From Mars" is widely considered to be one of the best rock music albums of all time.

The songs on Ziggy Stardust tell about a fictional rock star. The music is not only fun to listen to. It can help you better understand the workings of the English language, too.

Consider the song "Starman." Listen carefully to some of the words:

David Bowie is giving us information about how to use participial phrases.

Today, we will explore -- much like the larger-than-life personalities in Bowie's album -- a really large space. This area is called movability -- or the way English speakers are able to move words or expressions to different places in a sentence.

However, to keep from going too far into outer space, we will study just one kind of movable modifier: the participial phrase.

What are participial phrases?

In an earlier Everyday Grammar program, we talked about present participial phrases. These are groups of words that begin with the present participle, or –ing, form of the verb. Such phrases often act like adjectives in a sentence. They describe or can influence the meaning of other words.

Think back to David Bowie's song. The first words you heard were:

"There is a starman waiting in the sky..."

In the song lyrics, the participial phrase 'waiting in the sky' is acting like an adjective. It has an effect on the noun 'starman.'

In Bowie's song, the participial phrase comes at the end of the sentence.

But some participial phrases can move to different places in a sentence -- depending on how the sentence is structured.

When participial phrases act as non-restrictive modifiers, they can move around in the sentence. A nonrestrictive modifier does not define a noun; instead, it only adds information or comments on the noun. You can read about these modifiers in another Everyday Grammar program.

When these phrases move to different places, they can come at the beginning, middle, or end of a sentence.

One common adjectival participial phrase comes after the noun it is modifying - often in the middle of a sentence. Here is an example:

The noun phrase, "my friends," is exact in meaning. The participial phrase "walking at night" acts like an adjective. It gives information about the subject, "my friends."

If you wanted to move the participial phrase to the beginning of the sentence, you could say, "Walking at night, my friends used headlamps."

Or if you wanted to move the participial phrase to the end of the sentence, you could say, "My friends used headlamps, walking at night."

All of these sentences have the same basic meaning. 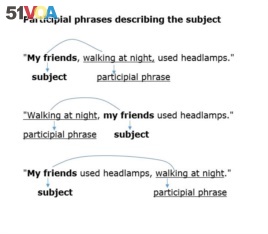 Moving phrases changes the sound of a sentence

But there is an important difference between all of these sentences: the way they sound.

When reading aloud, the pitch of your voice goes up and down at different places in each sentence. These changes, along with brief stoppages in the sentence, help direct attention to certain words and phrases.

When you change the usual position of a participial phrase, after an important noun, you are drawing more attention to its placement. [1] 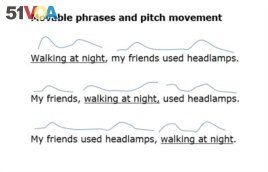 Many great musicians, poets, and speechwriters use movable phrases when they are writing or speaking, even if they do not consciously think about it.

They want to make sure an important word or idea comes at certain parts of a sentence. They also want to offer a mix in the sentence structures they use.

Moving adjectives, such as participial phrases, to different places in a sentence is one way to meet this objective.

How you can move phrases to highlight certain ideas

So how does this principle work?

In general, the most important information comes at the end of a sentence, says Martha Kolln, a grammar expert.

Important information can come at the beginning of a sentence, too.

The participial phrase gets the least amount of emphasis when it is in the middle of the sentence: For example, "My friends, walking at night, used headlamps."

These different grammatical structures are used differently depending on the situation. So, while you might hear some structures at a poetry or book reading, you might not hear them when Americans are talking with one another.

Can you create sentences with movable phrases?

The important points in this discussion are the following: participial phrases often act as adjectives, sometimes move to different places in a sentence and always modify the subject when they are set off by commas.

When you understand these principles, you will be able to write and speak more elegant sentences in English.

Naturally, there are other ways to change the meaning of a sentence. We will explore this in another Everyday Grammar program.

We will leave you today with some homework. Can you move the participial phrase to the beginning or end of this sentence?

album – n. a long musical recording on a record, CD, etc., that usually includes a set of songs

fictional – adj. written stories about people and events that are not real

lyrics – n. the words of a song

movability – n. grammar the ability to move to different places in a sentence

modifier – n. a word (such as an adjective or adverb) or phrase that describes another word or group of words

participial phrase – n. a verb phrase that is used to indicate a past or present action and that can also be used like an adjective

adjectival – adj. a word that describes a noun or a pronoun

headlamp – n. a light worn on the forehead (as of a miner or physician)

draw – v. to cause (attention) to be given to someone or something

emphasis – n. added force that is given to a word or syllable when speaking

consciously – adv. aware of something (such as a fact or feeling)

principle – n. an idea that forms the basis of something

comma – n. a punctuation mark , that is used to separate words or groups of words in a sentence