Update Required To play the media you will need to either update your browser to a recent version or update your Flash plugin.
By Caty Weaver
23 December, 2015

Many of us read the award-winning book, "Between the World and Me," a discussion of being black in America by journalist Ta-Nehisi Coates. Many also celebrated the latest Star Wars movie, in which the lead actors of the original 1977 film reappear.

And probably all of us heard at least some new music from Adele who returned to recording in 2015.

But few would argue that any entertainment news was bigger than the Bruce/Caitlyn Jenner story. That drama touched people, angered people, inspired people and amused people. 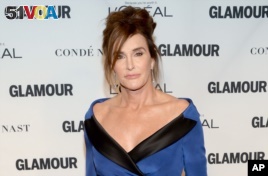 Caitlyn Jenner attends the 25th annual Glamour Women of the Year Awards at Carnegie Hall on Nov. 9, 2015, in New York.

The birth of Caitlyn Jenner

Bruce Jenner won the 1976 Olympic decathlon championship. The decathlon tests the athlete in 10 sporting events. The athlete must excel in jumping, throwing, running, wrestling and other events.

Jenner is also the famous stepfather of the Kardashian family. He regularly appears on the reality show, "Keeping Up with the Kardashians."

But, in April of this year, Bruce Jenner announced to the world that he is transgender.

Jenner's new name is Caitlyn. She told journalists that she had "always felt stuck in the middle." She said she began wearing women's clothing as a young boy. She did not know why she was doing it. It just made her feel good, she said.

Jenner also said she remains attracted to women and has not had a sex-change operation. She has been taking female hormones for years, however, to add female characteristics to her body.

In June, Caitlyn Jenner was on the cover of Vanity Fair magazine. The issue included a lengthy article about her new life. She said her ex-wife Kris Jenner and their children and step-children had been supportive of her decision.

Movies that moved us

What happens in reality is often mirrored in fiction. A few months after the Bruce/Caitlyn Jenner story drew the country's attention, the movie "The Danish Girl" was released. The movie is based on the life of the Danish artist Lili Elbe, one of the first people to have a sex change operation. Critics have praised the movie.

The big movies of the year, however, were mostly action and adventure. The biggest money-maker of 2015 is expected to be "Star Wars: The Force Awakens." The futuristic adventure movie series has been around for almost 40 years.

"The Force Awakens" is the seventh installment. It is breaking all kinds of box office records, including biggest domestic and worldwide openings. The film sold close to $250 million worth of tickets in the first three days of its release in the United States. Worldwide ticket sales add up to almost $530 million.

"The Force Awakens" sees the return of the three lead actors from the original "Star Wars." The new movie received major pre-release buzz, including a celebrity filled premiere in Los Angeles. The film was released to the general public on December 18.

Dinosaurs also had a huge impact on the box office this year. "Jurassic World" was released in June. It has since brought in more than $650 million in ticket sales around the world. The movie is the fourth installment in the "Jurassic Park" series that first hit theaters in 1993.

Other successful action movies this year include "Avengers: Age of Ultron" and "Furious 7." Both are listed in the top five highest money makers of 2015.

But, animated characters stole the hearts of young movie goers this year. The Pixar film "Inside Out" was a huge hit, selling $356 million worth of tickets.

The story is set in the mind of a young girl. The characters are five emotions.

And "Minions," a spin off from the "Despicable Me" series, also did well at the box office. Movie goers around the world bought more than $336 million worth of tickets sales to see the little yellow creatures called minions star in their own movie.

The year in books

One of the most powerful and popular books of 2015 was from writer, journalist and educator Ta-Nehisi Coates. "Between the World and Me" is written in the form of a letter to the author's son. It is meant to prepare him for the racial injustice he will face growing up African-American in the United States.

The book received much critical acclaim and won the National Book Award for non-fiction.

Another very successful book of 2015 is "Fates and Furies," by Lauren Groff. The book is about the inside of a marriage. It is told in separate parts from the points of view of the wife and husband.

Recently, President Obama said that "Fates and Furies" was his favorite book of the year. The National Book Foundation liked it, too. It honored the work with the National Book Award for fiction.

Twenty-fifteen was a good year for Kendrick Lamar and Taylor Swift. Both released wildly popular albums. Kendrick Lamar's "To Pimp a Butterfly" went straight to the top of Billboard's Top 200 Albums in the first week it was out. It has sold about 750,000 copies in the U.S. alone.

Earlier this month, Kendrick Lamar led the music industry in Grammy nominations. He is up for 11 awards including Album of the Year, Song of the Year and Best Rap Song.

But the most talked about music of the year came from British singer Adele. In 2012, Adele announced she was taking a break to "live a little bit." This year her fans celebrated her return to recording.

Adele's first single from her new album "25" was broadcast in October. The song "Hello" broke records for downloads, selling 1.1 million its first week.

We want to know what entertained you this year. Let us know in the comments section.

journalist – n. a person whose activity or job is collecting, writing, and editing news stories for newspapers, magazines, television, or radio

drama – n. a person (especially a woman) who acts as though things are much worse than they really are

transgender – n. of or relating to people who have a sexual identity that is not clearly male or clearly female

adventure – n. an exciting or dangerous experience — often used before another noun

despicable – adj. very bad or unpleasant: deserving to be despised

installment – n. any one of several parts of a long book, television program, etc., that are published or shown over a period of time