Update Required To play the media you will need to either update your browser to a recent version or update your Flash plugin.
By Alice Bryant
04 February 2021


Environmental activists and labor unions have worked together in the past, but are now on opposite sides of a heated dispute. The disagreement partly involves the building of an oil pipeline between Canada and the United States.

The U.S. is currently the world's largest producer of oil and gas. However, the administration of President Joe Biden aims to bring the country's release of carbon gasses to net-zero by 2050.

One of Biden's first acts was to cancel the permit for the Keystone XL oil pipeline. The administration also said it is reducing the amount of oil and gas production permitted on federal land.

The reactions to the administration's moves show the difficulties of forming policy that affects many different groups. Climate activists celebrated the cancellation of the Keytone XL pipeline. But labor unions want to keep projects from being stopped.

Mike Knisely is secretary and treasurer of the Ohio State Building and Construction Trades Council. He said he has been asking state officials to talk to the president about the effects of his climate policy on union members.

"I tell them they need to get back with Biden and ask if this all really has to happen on Day Two of the new administration," Knisely said. He said he is unhappy that "there's almost no common ground (on pipelines) with the environmental community." 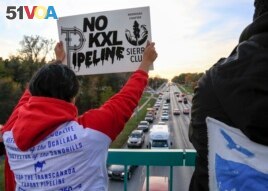 Climate groups have had successes in recent years. They have persuaded large investors to reduce financial holdings in the fossil fuel industry. They also have sought to get banks to avoid financing oil drilling in Arctic areas of the United States.

But a number of important labor unions have members who work on pipelines, in oil refineries and in industries tied to the energy industry. That includes the International Teamsters and North America's Building Trades Unions. Those unions opposed the move to cancel the Keystone XL pipeline. They also are moving against threats to other pipelines.

Environmental groups want to block oil imports from Canada's oil sands. They also are intensifying efforts to close three other pipelines. Two pipelines, known as Line 3 and Line 5, are operated by the Canadian company Enbridge. The company Energy Transfer's Dakota Access Pipeline, or DAPL, is the other.

Unlike the Keystone XL, the three other pipelines are currently operating. The Enbridge lines bring oil and fuel from Canada. The DAPL sends oil from North Dakota to the Midwestern states and Gulf Coast. Legal cases and government rules threaten all three pipelines.

A White House spokesman said the Biden administration is considering a recent court decision that called for an environmental study of the DAPL.

Phillip Wallace is a business representative for Pipeliners Union 798 in the state of Minnesota. Wallace said he was concerned the new administration may try to stop the DAPL. His union is planning demonstrations to support its building once COVID-19 restrictions ease.

On Friday, environmental protesters stopped construction on a Line 3 work area in Minnesota. It was one of several actions this year that has resulted in arrests.

"If KXL can't pass the climate test for Biden," then Line 3 surely cannot, said Winona LaDuke. She is executive director of Honor the Earth, an indigenous environmental group.

Unions are also increasing support for Enbridge's Line 5 pipeline. It runs under waters where Lake Huron and Lake Michigan meet. Activists want to close the pipeline but Enbridge says it is trying to improve it to protect the environment.

Enbridge recently received a state permit to build a tunnel for the pipeline. The company still needs permission from the U.S. Army Corps of Engineers.

In November, Michigan Governor Gretchen Whitmer ordered the pipeline closed. However, the United Steelworkers union has been trying to build support with lawmakers to keep the line operating.

In a statement, the group told Reuters that the United Steelworkers union "strongly supports both the Line 5 replacement" project and the continued operation of the existing pipeline. The group said hundreds of its union members and their communities need the jobs created by Line 5 to support their families.

union –n. an organization of workers formed to support their interests

net-zero –n. a situation in which nothing is gained and nothing is lost

fossil fuel –n. a fuel, such as coal, oil or natural gas, that is formed from dead plants or animals

drill –v. to make a hole in the earth in an effort to find oil or water

refinery –n. a manufacturing center where a raw material is purified and changed