Update Required To play the media you will need to either update your browser to a recent version or update your Flash plugin.
By VOA
07 September, 2015


Environmentalists in Zimbabwe are concerned about the building of shopping malls and housing on wetlands. They say the development will affect water supplies in heavily populated areas. Environmentalists say that if the work continues, the city of Harare may face water shortages or will need more money to purify its water.

Those are sounds from one of the few remaining wetlands near Harare. Unlike other parts of the city, the area is covered with green grass and a few trees.

Officials say more than 250 bird species live in the wetlands. Some of the birds travel there from other parts of the world. 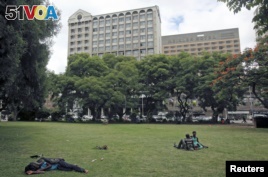 Zimbabweans rest at a park outside Meikles Hotel in central in Harare, February 24, 2015.

But shopping malls and other buildings now cover much of the wetlands. The population of Harare has grown more than 100 percent over the past 10 years. It is now estimated at more than two million people live in Zimbabwe's capital. Most of the increase is a result of people moving to the city from rural areas.

Another mall is planned for wetlands in Borrowdale, east of Harare. Jimmy Muropa is a conservation field officer. He worries about this development.

"We are not against any form of development, but what we are basically saying is that those malls or houses should actually be properly sited on higher ground. We are for development but on appropriate ground. Simple."

Scientists say wetlands clean up and store water. The purified water is slowly released into rivers and lakes.

Harare Residents Trust, a community group, says Zimbabwe's water prices are now high because of the destruction of wetlands.

Precious Shumba is head of the trust.

"The monitoring framework is very weak. The Environment Management Agency (EMA) does not follow laid down procedures when it comes to approval of buildings. There is so much corruption. There is no monitoring. The only relief that is available to EMA and the council is to charge penalties for violations. But they are not stopping, meaning to say that our wetlands will continue to go."

The Environment Management Agency is a government group. Its job is to guarantee sustainable use of the environment in Zimbabwe. Steady Kangata is a spokesman for the agency. He says the group was trying to share information about the importance of not building on wetlands. He denies that Harare does little to enforce wetlands laws.

Conservationist Dorothy Wakeling says the wetlands are important areas that cannot be destroyed.

"These wetlands are our only source of water. If we take all our wetlands of Harare, we are taking away our water source. What are we going to do for replenishing streams and rivers that feed into dam?"

But the demand for land for housing, businesses and offices continues to increase.

Sebastian Mhofu reported this story from Harare. Jonathan Evans adapted it for Learning English. George Grow was the editor.

shopping mall – n. a large building or group of buildings with many different stores