The Epidemic of Cheating in Sports

Update Required To play the media you will need to either update your browser to a recent version or update your Flash plugin.
By VOA
30 January, 2015


Throughout time, cheating in sports has caused debate and dispute. Athletes often do whatever it takes to win in competition. Some take drugs that are meant to improve their performance, such as steroids. These might make them run faster or hit a baseball harder.

In the United States, Sunday, the National Football League will hold its championship game. One of the two teams to take part in the so-called Super Bowl is under a cloud of suspicion. 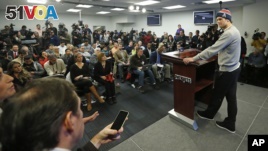 New England Patriots quarterback Tom Brady faces members of the media at a news conference in Foxborough, Mass., Thursday, Jan. 22, 2015. Brady said Thursday that he did not know how New England ended up using underinflated balls in its win Sunday against the Indianapolis Colts in the AFC Championship game. (AP Photo/Elise Amendola)

In a game two weeks ago, the New England Patriots team was found to be using footballs that did not meet NFL rules. The air pressure was too low in 11 of the Patriots' 12 footballs.

Sources say the leading official at the game had approved all the balls before kick-off, or the start of play. They then were returned to each team.

Those results have not been made public.

The NFL is investigating what has come to be known as "Deflategate." Some critics say the NFL should severely punish the New England Patriots and their coach Bill Belichick if it is proven they deflated their footballs.

Under NFL rules, footballs may not be changed once they are approved. If a person is found to have broken the rules he or she could face a $25,000 fine and other action.

Similar Incidents Around the World

Cheating is not only found in U.S. sports. The practice crosses many borders.

In 1999, a South African runner named Sergio Motsoeneng finished 9th in the Comrades Marathon. Competitors run 89-kilometers in the annual race held in South Africa. Motsoeneng won about $980 in the race. He wanted to use the prize money to help his father.

Motsoeneng was seen starting and finishing the race. But he shared the running with another person. Motsoeneng changed places several times during the race with his nearly identical younger brother, Fika. They both wore identical uniforms, numbers, and hats that covered their faces.

Sergio Motsoeneng was forced to give back the money. Officials also banned him and his brother from entering the event for 10 years. In 2010, Sergio Motsoeneng finished third in the Comrades Marathon. However, this time tests showed he had used a banned substance.

To qualify as having an intellectual disability, competitors had to have an intelligence quotient, or IQ, below 70. When tested, 10 of the 12 members of Spain's basketball team were found to be ineligible. The entire basketball team was disqualified and forced to return their gold medals.

Football, or soccer as it known in the United States, is one of the most popular sports in the world. And Diego Maradona was one of the best football players in the world. In 1986, he helped lead his home country of Argentina to the World Cup. But a rules violation surrounds one of his most famous goals.

The Argentinian team was tied 0-0 in the second half of their World Cup quarterfinal game against the team from England. Maradona passed the ball to his teammate who kicked it high into the air. But when Maradona ran towards the ball, he jumped up and illegally touched the football with his hand. The ball then went into the opposing team's net for a goal. The game officials did not see the illegal move known as a hand ball. The infamous incident is called the "Hand of God."

Maurice Schweitzer is a professor at the University of Pennsylvania in Philadelphia. He is an expert on the psychology of cheating. He recently spoke about "deflategate" in a public radio broadcast from Boston, Massachusetts. He said there are several reasons why an athlete may cheat, including a fear of losing. In his words, "if you're expected to win, you actually face more pressure to come out on top."

But he says the culture of a sports organization can also be involved. He says that in some organizations, "the line between cheating and merely being very competitive isn't very clear."

annual – adj. happening once a year

ineligible – adj. not allowed to do or be something

infamous – adj. well-known for being bad; known for evil acts or crimes

deflate – v. to remove air or gas to something, such as a tire or a ball