Update Required To play the media you will need to either update your browser to a recent version or update your Flash plugin.
By VOA
12 April, 2016

Tuesday was National Equal Pay Day in the United States.

The day is designed to bring attention to wage differences between American men and women. The U.S. Census Bureau reported that in 2014, women were paid 79 cents for every one dollar that men earned.

Equal Pay Day marks how far into the calendar year women must work to earn the pay that men earned last year. 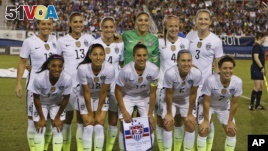 The US team poses prior to their match against Germany in a women's soccer game in the SheBelieves Cup, Wednesday, March 9, 2016, in Boca Raton, Fla. (AP Photo/Joel Auerbach)

President Barack Obama gave an Equal Pay Day speech on Tuesday. He said that, "the pay gap between men and women offends our values as Americans."

Obama also noted the pay differences in the world of professional soccer.

One Twitter user joked, "I don't support equal pay in US Soccer. Our women's team won the World Cup three times, so they should be getting *lots* more than the men."

Naturally, some jobs require equal pay for men and women. Presidential candidate Hillary Clinton posted a video on Twitter Tuesday of a young girl asking her, "Do you think when you're president you'll be paid as much as if it were a man?"

Clinton's answer? "This is one of the jobs where they have to pay you the same. But there are so many examples where that doesn't happen."

offend- v. (formal) to be against what people believe is acceptable or proper