Determined, Dedicated and Disciplined to Be Fit

Update Required To play the media you will need to either update your browser to a recent version or update your Flash plugin.
By Marsha James
20 July, 2016


It would be an understatement to say that Ernestine Shepherd is in better condition than most people. The 80-year-old bodybuilder lives by the words "determined, dedicated and disciplined" to stay in the best health possible.

Yes. You heard that right. Ernestine Shepherd recently celebrated her 80th birthday. And she still works out every day. But this was not always the case, she says.

"Earlier in life, I really did not think too much about eating correctly nor exercising, but as time went on, my mind changed completely."

One day she went out shopping with her sister, Mildred Blackwell. Shepherd tried on a swimsuit. She says she did not like how it fit her. She says both women realized they were out of shape.

Blackwell suggested the sisters take a fitness class to lose weight and get in shape. So at age 56, alongside her sister, Shepherd started to exercise. 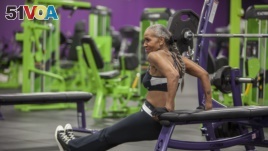 She says her sister inspired her to do more than just exercise.

"My sister was instrumental in getting me started to lift weights and to try to become a bodybuilder."

Then, in 1992, Mildred Blackwell died suddenly of a brain aneurysm. Ernestine says the loss deepened her commitment to good health. She promised to continue training as a bodybuilder to honor her sister's memory.

"After my sister's death I first couldn't really do too much of anything. I was just so upset about her death. But then finally I got myself together, decided that I would start working out and I started working out with a friend by the name of Raymond Day. And we worked out three days a week."

And, she won her very first competition.

A call from the Guinness Book of World Records followed a short time later.

"Yohnnie got a call from the Guinness Book of World Records stating they thought I was the oldest female competitive bodybuilding in the world, but they would have to check it."

Ernestine Shepherd holds the 2010 and 2011 title in the Guinness World Records as the World's Oldest Performing Female Bodybuilder.

Shepherd runs every morning. She lifts weights three times a week. She says she keeps a balanced diet of proteins and carbohydrates such as chicken and rice. She also drinks lots of water.

And she gets support from Collin, her husband of 52 years. He helps prepare her seven small meals a day. 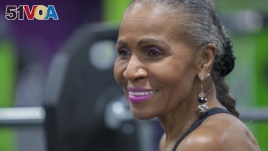 Shepherd still competes in body building events. She also works as a fitness trainer and professional model. And, this year, she became an author. Her book, "Determined, Dedicated and Disciplined To Be Fit," came out in April, just before she turned 80.

Shepherd says she wanted to let people know, especially older people, that it is not too late to get healthy.

And, the author shares a secret about aging.

"If ever there was an anti-aging pill you will have to call it exercise."

out of shape – expression - in poor physical condition, unfit

fitness class – n. a course taken to help get in shape and become healthy

inspiration – n. something that makes someone want to do something

instrumental – adj. very important in helping or causing something to happen or be done

aneurysm - n. an abnormal blood-filled tumor usually an artery resulting from weakening of the artery wall

diet – n. the food that a person usually eats

body building – n. the activity of doing exercises (such as lifting weights) to make the muscles of your body larger and stronger

anti-aging – adj. (a product or technique) designed to prevent the appearance of getting older