Update Required To play the media you will need to either update your browser to a recent version or update your Flash plugin.
By George Grow
02 January, 2019


Three-day-old Oskar Lunde sleeps in a small bed at an Estonian hospital. Across the room, his father turns on a laptop computer. "Now we will register our child," Andrejs Lunde says, as he lifts his identification card into the card reader. His wife, Olga, looks on.

And just like that, Oskar is Estonia's newest citizen. No paper. No time spent standing in a line.

Estonia has launched a project to make government administration completely digital. The goal is to reduce the size of the government work force, open up the decision-making process and fuel economic growth.

As more countries turn to online government services, Estonia's experiment provides a look at how interacting with the state might be for future generations.

Need medicine? Reach for a computer and send an email or text message to a doctor. Need help from the local government? There are no lines on websites. As for education, parents can see whether their children's homework was done on time.

Estonia has created a single system that supports electronic authentication and digital signatures. It provides paperless communications for both the government and private industry.

There are a few things that one cannot do electronically in Estonia: marry, end a marriage or buy and sell property. That is only because the government has decided it was important to show up in person for some big life events.

This spring, the government aims to take additional steps. If Oskar had been born a few months later, he would have been registered electronically, with his parents receiving an email welcoming him into the nation.

Marten Kaevats is Estonia's national digital adviser. He says the goal is a government that supports its citizens while staying out of the way. 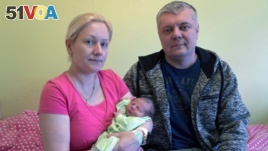 Other countries have a lot to learn, says Siva Vaidhyanathan. He is director of the Center for Media and Citizenship at the University of Virginia.

Estonia took time to build security and privacy into its online model. "It made sure that state accountability is part of the process," Vaidhyanathan said.

Estonians largely seem to have welcomed the new system, while people in other countries are more concerned about attacks on computers.

At a demonstration of the digital system, project manager Indrek Onnik stood beside a large picture of his computer profile. It showed his high school records from 10 years ago and driving record. If he had a dog, its vaccination record also would appear there. Citizens can follow their personal data and see if any government or private organization looks at it.

The system is supported by a software program called X-Road, a data exchange system that links computer databases. Outgoing records are digitally signed and recorded, and all incoming data is confirmed and noted.

Push for digital came with independence

When Estonia declared independence from the former Soviet Union in 1991, it had to build a new economy. Government leaders looked for an industry where the country could compete. They decided on information technology and the internet.

When the poor country needed to replace a 1930s phone system, former President Toomas Hendrik Ilves rejected the offer of a free analog system from Finland and argued for a digital one.

"The only way we could do really well was to go digital," Ilves told the Associated Press.

The project, which began in 1997, led the way for Estonia's technology industry. The government built computer labs for young students in schools. And Microsoft bought Estonia's most famous high-tech export, the video calling service Skype, for $8.5 billion in 2011.

Last year, information and communications accounted for 5.9 percent of the economy. The government hopes to increase that figure with an "e-residency" program that lets entrepreneurs around the world register their businesses in Estonia and gain a presence in the European Union. More than 51,000 people from 167 countries have registered at a cost of 100 euros, or $114 each. 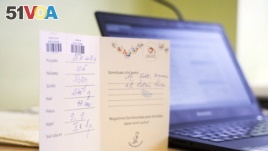 In this photo taken on Friday, Nov. 16 2018 in Tallinn, Estonia, a card shows all the details to register the birth of new baby Oskar Lunde. (AP Photo/David Keyton)

The government also has a plan to re-establish digital services in the event of invasion or severe cyberattacks. The plan would set up what are being called data "embassies" in other countries like Luxembourg. Like a traditional embassy, the servers are considered Estonian territory and would give the government a chance to set up somewhere else, if needed.

Will this work in larger countries?

Zvika Krieger is head of technology policy and partnerships at the World Economic Forum. He wonders if Estonia's system can be used in countries, like the United States and India, with more people and more governments at the city, state and local levels.

Krieger said, "Estonia is a good first test case. And now the question is whether other countries will find Estonia's success compelling enough to take the risk to try it at a larger scale."

Estonia sees its system as a design for modern democracy as compared to authoritarian use of technology to control citizens.

Ilves, the former president said, "Estonians hate their politicians just as much as everyone else...But at least since the administration of the state works extremely well and efficiently, people trust the system."

Andrejs Lunde is among those who trust the system.

He says digital government makes life so much easier that it is worth the risk. He points out that personal information can be stolen from paper-based systems as well.

"If someone really wants my information, they will get it anyway," said Lunde. "If they can get Hillary's emails, they can get mine."

Danica Kirka reported this story for the Associated Press. George Grow adapted the report for VOA Learning English. Hai Do was the editor.

online – adj. connected to or involving a computer or telecommunications system

accountability – n. being responsible for what you do

profile – n. a description of something that contains all the most important or interesting facts about it

entrepreneur – n. person who attempts to make a profit by starting a company or by operating alone in the business world