Update Required To play the media you will need to either update your browser to a recent version or update your Flash plugin.
By Hai Do
03 November 2022


An official close to the Ethiopian peace talks says the government and Tigray forces have signed an agreement to end "hostilities."

The unnamed official told the Associated Press that the final agreement says Tigray forces will be disarmed, starting with "light weapons" within 30 days of Wednesday's signing. Ethiopian federal security forces will take control of all federal buildings, airports, and highways in the Tigray area. And a temporary administration will be established after talks between the parties. 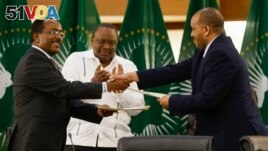 The agreement sets deadlines on disarmament but little else. And it could be difficult to get all involved to surrender their weapons to complete the deal.

The Tigray lead negotiator described the agreement at Wednesday's signing as "painful concessions."

The deal came after 10 days of talks in Pretoria, South Africa, helped by the African Union. The union with representatives from both sides and African experts will follow the process.

Observers of the conflict welcomed the agreement. "This is very much a welcome first step," said a spokesman for the United Nations secretary-general. U.S. Ambassador to the United Nations Linda Thomas-Greenfield told reporters she was very pleased because "what it means is that lives will be saved."

The government of neighboring Eritrea, whose forces have fought alongside Ethiopian ones, has not commented on the deal. The agreement says Ethiopian forces will be deployed along the borders and "ensure that there will be no provocation or incursion from either side of the border."

On Thursday, Ethiopian Prime Minister Abiy Ahmed said during a visit to southern Ethiopia that his government's proposal at the talks was accepted "100 percent" and the government was ready to "open our hearts" for peace.

He also said the issue of disputed areas, widely seen as one of the most difficult, will be resolved only through the law of the land and negotiations.

Inside Tigray, one humanitarian worker in the town of Shire said there were no sounds of gunfire, as in the past few days, and a "blockade" of movement on people and vehicles was still in place.

Hai Do adapted this story for VOA Learning English based on reporting from VOA News, The Associated Press and Reuters.

deadline - n. a date and time when something must be finished

concession - n. something that is given up in order to reach an agreement

provocation - n. an action that causes someone to become angry or to something