Update Required To play the media you will need to either update your browser to a recent version or update your Flash plugin.
By Tom Gardner
09 February, 2018


The small Ethiopian town of Dukem has some of the most fertile land in the country.

It also is home to Ethiopia's first industrial park.

Dukem is part of a government-led push to turn the mostly agricultural country into Africa's manufacturing center.

The industrial park, the Chinese-owned Eastern Industrial Zone or EIZ is in the process of expanding. Plans call for an additional 167 hectares to be developed. This will force about 300 farmers from their land, a move that has reopened old wounds with the local population.

No more land to farm or live

The Ethiopian government plans to have 15 industrial parks nationwide by June 2018. Chinese companies are building 5 more.

However, many farmers are still unhappy over losing their land when the first industrial zone was created.

"We were the first," said Shewangizaw, a farmer who lost his fields to an Ethiopian-owned factory back in 2006.

He and around 40 other farmers were forced to move when some of the first factories arrived in the area 10 years ago. The farmers say they failed to get paid for what the land was worth.

"I don't have any land now," said 72-year-old Bashada, who lost nearly five hectares of farmland. He now pays an older neighbor $367 a year for use of his farmland.

The group is campaigning to have its case heard by the federal government.

"It's not fair," said Shewangizaw. "Our families were just destroyed. At the time compensation paid to us was so, so cheap. And we don't have any land to farm or live on now."

Muhammed Tilahun is with the Dukem Land Development and Management Office. He told the Reuters news agency the local government was now considering the concerns of farmers.

That includes 190 farmers and their children who lost their land in 2007. He said they are now being given extra land to support them.

Yet many others across central Ethiopia are still angry. The area has experienced fast development and industrialization over the past 10 years.

In 2014, the government planned to expand the capital, Addis Ababa, into the surrounding area of Oromia. Under the proposed expansion, the city would, in effect, swallow up towns like Dukem.

The proposal incited large protests, which spread across the country. The unrest resulted in hundreds of deaths and eventually led the government to declare a nine-month state of emergency. 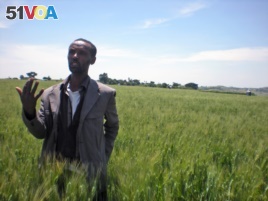 In this photo taken on Wednesday, Oct. 10, 2012 farmer Bedlu Mamo, stands in the middle of a field, on his half hectare wheat farm near Debre Zeit, in Ethiopia's Amhara region. (AP Photo/Kirubel Tadesse Ayetenfisu)

Peace has now returned to Dukem, but farmers who will lose their land to the EIZ expansion are angry once more.

"Our land came from our ancestors," said Telahun Chaka, a 57-year-old farmer in Goticha village.

Chaka said he expects to lose his remaining farmland this year. "I was hoping to give it to my children, too. Now I have nothing for them to inherit," he said.

Chaka and his neighbors tried to resist the plan, he said, leading police to briefly detain four of them.

Solomon Basha, a representative for the Dukem town administration, said this was not true.

"No farmers are protesting the expansion now," he told the Thomson Reuters Foundation. "No farmers were arrested or killed in this process."

The EIZ has promised to build a hospital, a school and a market center for farmers. It has also promised over $4,000,000 in compensation for the latest step in the expansion, Basha said.

Each farmer will receive 500 square meters of replacement land along with their payment, he added.

"This is propaganda," Chaka said. "They promise us a lot of things - new land, a school for our children, electricity, running water - but after they take it nothing happens. So we lose our land and end up in poverty."

However, compensation rates have changed in Ethiopia since the first time EIZ started taking control of and developing land.

Muhammed Tilahun, the local official, said compensation during the first part of development was "very low" and did not include new agricultural land.

He said they had set up a committee to identify people who had suffered under the earlier rules. He added that the price of compensation had more than doubled.

In Ethiopia, all land is under the control of the government, and there is no established price for farmland.

Officially, households should be paid 10 times the market value of what can be produced on their land in a single year. But this can be difficult to measure, and easily abused by government officials.

"The amount of money they pay for compensation is actually quite high," said Stefan Dercon, chief economist of the UK Department for International Development.

The government also plans to increase compensation to farmers again later this year.

The industrial zone currently employs more than 10,500 Ethiopians. They are mostly from the Dukem area, notes the Ethiopian Investment Commission.

But locals criticize low wages and poor treatment by employers.

Lemma Teshome, the son of a farmer whose land is being developed this year, worked for three years at a factory.

"Nothing was good," he said. "The pay was low and our hours were long. We were so disappointed."

inherit - v. to receive (money, property, etc.) from someone when that person dies

cheap - adj. not costing a lot of money

industrial park - n. an area outside of a town or city that is designed especially for factories or offices