Ethiopian Textile Industry at Risk if US Suspends Trade over Tigray

Update Required To play the media you will need to either update your browser to a recent version or update your Flash plugin.
By Susan Shand
01 November 2021


The United States is considering suspending Ethiopia's tax-free trade position to punish it for violence and food shortages in Tigray. Ethiopia launched a military campaign in the northern state a year ago to try to crush a local force, the Tigray National Liberation Front. The conflict has largely blocked aid transports to the area.

A suspension of the tax-free recognition would seriously threaten Ethiopia's cloth products, or textiles, industry. That growth industry is part of Ethiopia's plan to become a center for manufacturing and improve its economy. 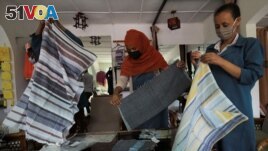 Employees of the Sammy Ethiopia hand made garments, hand-woven textiles and basketry factory package scarfs for export to U.S. clients, at the factory in Addis Ababa, Ethiopia, October 14, 2021. (REUTERS/Tiksa Negeri)

On workdays in Addis Ababa, the capital city, thousands of women sit at sewing machines making cloth products for export.

Many of these workers will lose their jobs if the U.S. suspends the country's special tax break.

Finoteselam Nigussie is a 40-year-old textile worker who pays for her home and her daughter's school from her earnings. The company's owner, Sammy Abdella, set up his business almost 20 years ago. He has 250 workers.

"People...have worked with us since we started. We have created a family," he said.

While Ethiopia is a comparatively small textile exporter, loss of its trade status would still cause problems for several worldwide clothing sellers, such as Tommy Hilfiger and Calvin Klein. They have already been hurt by COVID-19 linked slowdowns in transportation and other areas.

The U.S. has repeatedly expressed concern about reports of sexual violence by Ethiopian and allied Eritrean soldiers in Tigray.

The United Nations says a refusal to permit aid to enter the Tigray area has forced 400,000 into famine, or severe food shortage. On Thursday, it said no food trucks had entered Tigray for the past 10 days. There have also been many reports of mass killings of civilians.

The government has denied it is preventing aid from entering Tigray and said some soldiers have been tried for abuses. It did not give additional information.

The chief trade representative for the U.S. said there will be a decision soon on Ethiopia's AGOA standing.

"We should not politicize trade," he told Reuters.

Over the past ten years, Ethiopia has spent billions building up its manufacturing. Some factories produce goods for large clothing companies such as PVH, owner of Calvin Klein, Speedo and Tommy Hilfiger.

At Sammy Ethiopia, where Nigussie works, about 90 percent of products are exported to the United States. If Ethiopia is suspended, Abdella said his company will close.

Ethiopia exported about $237 million worth of goods tax-free to the United States under AGOA in 2020, most of it clothing and textiles, says the U.S. commerce department.

It is unclear what will happen to international investors and Ethiopian companies if the U.S. goes ahead with the suspension.

Though Ethiopia would suffer from an AGOA suspension, large fashion companies would find other suppliers, said Neil Saunders. He is a retail expert who works for Conlumino, a retail research company.

Raghavendra Pattar is head of Nasa Garment, a manufacturer in Hawassa Industrial Park. Nasa exports about 95 percent of its clothing to U.S. companies. It has 1,200 workers, mostly women, and spent $7 million to set up the factory two years ago.

An AGOA suspension would stop its plans to expand.

"AGOA ... is the reason buyers are coming to Ethiopia," he said. He added that if the tax-free status is removed, "the buyers will go to another country."

The Reuters News Agency reported this story. Susan Shand adapted it for Learning English. Caty Weaver was the editor.