Update Required To play the media you will need to either update your browser to a recent version or update your Flash plugin.
By Ashley Thompson
31 May 2022


The European Union (EU) has agreed to ban the majority of Russian oil imports. The agreement marks the biggest move yet to punish Russia for its war in Ukraine.

Since Russia's invasion of Ukraine on February 24, Western nations have sought to punish Russia economically for its aggression. But targeting the energy sector has proven difficult.

The EU depends on Russia for 25 percent of its oil and 40 percent of its natural gas. European countries that are even more heavily dependent on Russia have been especially resistant to act. 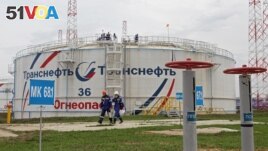 EU leaders agreed late Monday to cut around 90 percent of all Russian oil imports brought in by sea over the next six months.

The ban permits a temporary exemption for imports delivered by pipeline. The exemption was critical in bringing Hungary on board with the decision, which required approval from all EU leaders. Hungarian Prime Minister Viktor Orban had made clear he could support the oil ban only if his country's supply was guaranteed. Hungary gets more than 60 percent of its oil from Russia through the Druzhba pipeline.

Both leaders also noted that Europe would need time to get used to the effects of the ban. They said any additional bans on Russian energy could only come slowly, if at all.

Dmitry Medvedev is the deputy head of Russia's Security Council. Medvedev is also a former Russian president and prime minister. He said Tuesday that energy sanctions against the country were meant to hurt Russian citizens by making it harder for the government to fund social programs.

"They hate us all! The basis for these decisions is hatred for Russia, for Russians, and for all its inhabitants," Medvedev wrote on the Telegram messaging app.

Simone Tagliapietra is an energy expert and research fellow at the Brussels-based organization Bruegel. She said Russia would likely have to sell its oil at a lower cost to other buyers. She called the embargo "a major blow."

Russia has also made moves to withhold its energy supplies, even with the economic damage it could suffer as a result. Russian energy company Gazprom said it cut natural gas supplies to Dutch trader GasTerra on Tuesday. The move was announced before EU leaders agreed to the embargo. Russia already cut supplies to Bulgaria, Poland and Finland. It is considering doing the same to Denmark.

GasTerra said homes would not be affected; it had bought gas from other countries because it expected a possible shutoff.

Talks on Tuesday at EU headquarters in Brussels centered on ways to end the EU's dependence on Russian energy. Leaders also expected to discuss how to help Ukraine export millions of tons of grain trapped inside the country as a worldwide food crisis grows.

Leaders are calling on Russia to halt its attacks on transport infrastructure in Ukraine and lift its blockade of Black Sea ports so that food can be shipped.

Ukrainian President Volodymyr Zelenskyy has said Russia has prevented the export of 22 million tons of grain, much of it meant for people across the Middle East and Africa. He accused Russia of "deliberately creating this problem."

inhabitant - n. a person or animal that lives in a particular place

deliberately - adv. in a way that is meant, intended, or planned

We want to hear from you. Write to us in the Comments section, and visit 51VOA.COM .