Update Required To play the media you will need to either update your browser to a recent version or update your Flash plugin.
By John Russell
09 September 2022


European Union ministers met Friday in Brussels to seek joint solutions to protect citizens from rising energy prices. The increases threaten to put millions of people into cold and poverty this winter as Russia cuts off natural gas supplies.

As tensions with Russia increase over the war in Ukraine, energy ministers from the EU's 27 nations could not agree on whether to put a price limit on Russian natural gas. Hungary refused to agree to such a limit, saying it would go against its supply interests.

Other countries differed over whether a price cap should involve only Russia or include other producers too. 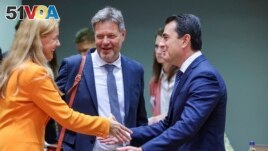 EU Energy Commissioner Kadri Simson said, "Russia has used its gas supplies as a weapon to foster an energy crisis next winter, but also to weaken our economies and divide — politically — the European Union." She added, "We have to ensure that their efforts will fail."

Several officials admitted that reaching an agreement would not be easy. They said this is because each country has different energy mixes, supplies and needs. But the ministers did agree that a decision should come quickly so that the most vulnerable people across Europe are able to receive timely assistance.

Russia has reduced natural gas supplies that power factories and heat homes. This has driven energy prices up to record highs and fueled inflation that experts believe could put Europe into a recession.

Despite the sense of urgency, the ministers are set to only provide guidelines to the EU's executive branch, the European Commission. The commission will then present an official proposal for member states next week.

At that point, EU ministers will meet again to consider a joint proposal. The hope is that a decision can be reached early next month.

Germany's Economy and Energy Minister, Robert Habeck, said he thinks the commission had "a clear mandate" to create a workable proposal – or proposals – to bring prices down.

Habeck said Friday's meeting clearly showed the different situations faced by EU member states. But everyone showed a willingness "to bring about relief for European citizens," he added. Not reaching an agreement "is not an option," Habeck said.

Russian pipeline gas made up 40 percent of all gas Europe imported before President Vladimir Putin ordered the invasion of Ukraine in February. It now only makes up 9 percent of the total.

The commission believes the EU is prepared for the winter, with joint gas storage levels at 82 percent — well ahead of the 80 percent target that was set for the end of October.

Raf Casert reported on this story for the Associated Press. John Russell adapted it for VOA Learning English.

foster – v. to help (something) grow or develop

blackmail – v. to make a person or group do something by threatening them

mandate – n. support for action given to someone by the people voting for them